Lou Lamoriello not letting the Islanders get ahead of themselves 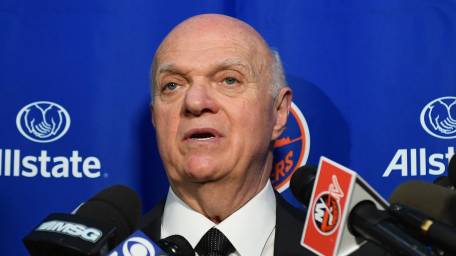 The Islanders are looking like a lock for a third consecutive postseason appearance. Barring an unforeseen collapse in the next 14 games, the Isles should find themselves in a top-three spot in the highly-competitive MassMutual East Division. But looking beyond the games that remaining, there’s an expectation that the group g.m. Lou Lamoriello has assembled will be one of the final four, if not the last two teams remaining for the Stanley Cup.

The Isles’ GM though has a different way of looking at those things. And why not? He’s had tremendous success — three Stanley Cups, his organization having a decade long run of postseason berths — and been in this league long enough to not start thinking about the future and to just focus on the present. That’s how he wants his team to go about things following an eventful trade deadline.

“The only thing on our mind is getting ready to play two days from now and the next game,” Lamoriello said while doing a spot on NHL Network Radio yesterday afternoon. “You never go beyond that. It’s all about trying to get your team settled in right now in the reference to the new players that are here. That’s Barry (Trotz) and the coaching staff’s job to get those pieces into place that is the best for us.”

Those pieces Lamoriello was speaking of are Kyle Palmieri, Travis Zajac and Braydon Coburn. Palmieri and Zajac have already played in all three games since their arrival last Thursday, but Trotz has tweaked where he inserted them in the lineup. In the Isles’ OT win over the Rangers Sunday, Trotz gave Zajac first line duties with Mathew Barzal and Jordan Eberle; Palmieri was placed on a line with J.G. Pageau and rookie Oliver Wahlstrom, which was the team’s most dangerous unit offensively all evening.

Even with their big time moves, it’s not a shock  there’s no such approach of looking ahead for this Islander squad. Refraining from that has been an underlying key to their success under the Trotz-Lamoriello regime. It’s always been about the task at hand. That next task now being a two-gamer with the Boston Bruins, who are currently holding on to the fourth and final playoff spot in the East while the Rangers are nipping at their heels.

“We just worry about one day at a time, Lamoriello added during the interview. “Never worry about the end result. If we do things right, it has a way of taking care of itself.”

The Islanders have been doing things right for a long time now and they’ve been rewarded for it. And course, bringing a Cup back to Long Island is the ultimate reward in the end. While the latter is what the fans might be thinking about now, it’s the farthest thing on the mind of the team itself and the general manager.

Lamoriello was asked about several other topics during his 15-plus minutes on air. In particular, he heaped a ton of praise on Brock Nelson. As many remember, Nelson seemed like a lost cause before he and Trotz’s arrival. Since then, he’s been a revelation.

“Brock has consistently gotten better since the day I got here,” Lamoriello said when asked about the 30-year-old center’s game of late. “He gets all the hard matchups, and despite that he leads us in goals. He still has a certain amount he can grow and get better.”

The fourth line also came up in the conversation with Lamoriello.

“They all bring something different. When they’re going, they’re the spark plug. They drive the engine.”

This season might be trio’s final act together with Casey Cizikas being an unrestricted free agent. That aside, the Islanders’ g.m. continues to marvel at how great they are.