Last nightâ€™s loss for the Islanders was a first, and shouldnâ€™t happen again 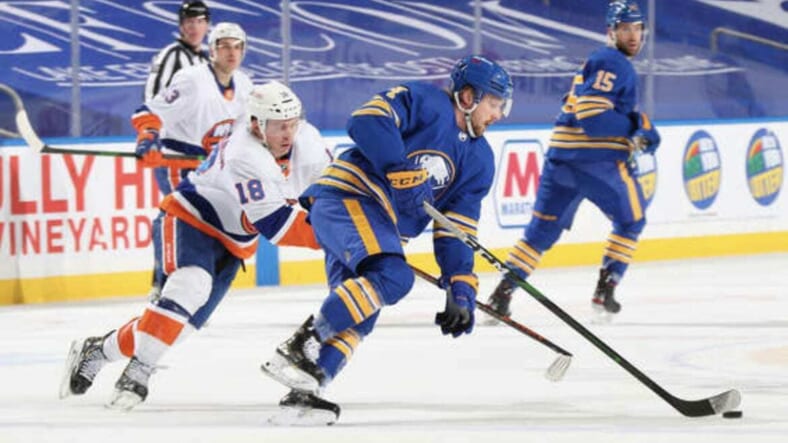 Islandersâ€™ head coach Barry Trotz has used a lot of ways over the years to describe how his team plays, particularly when it comes to a loss.

â€œNot enough skin in the gameâ€, â€œgoing east-west instead of north-southâ€, tried to play an easy gameâ€, come out of the coachâ€™s mouth from time to time. But last night, following the Islesâ€™ 4-2 defeat to the Buffalo Sabres, Trotz used a term that rarely has ever been heard when ever talking about the Islanders with him at the helm.

â€œI thought we played with a little bit of arrogance,” Trotz said in the postgame after his group blew a 2-0 lead. “We were just saying it was going to be easy and we had a lead and then we just made it easy for them.

That word though: arrogance. Sure the Islanders had already locked up a playoff spot 48 hours earlier with their beating of the Rangers, sure the Sabres are one of the worst teams in the league, but the Isles under Trotz have never been the kind to show that side of their game even when playing down to their competition.

The Islanders after Oliver Wahlstrom made it 2-0 following the midpoint of the second tried to just cruise. They resisted from playing hard, stopped playing physical at both ends of the ice, and let the Sabres run around them with any pushback.

Thatâ€™s not the Islanders we know. Thatâ€™s not the mentality they come with when they have a lead. And clearly thatâ€™s not what should happen at this time of the year when the postseason is on the horizon; this is more just a fear of how fans think, albeit not all of them.

Maybe itâ€™s reaching at straws. Or maybe itâ€™s not. The Isles arenâ€™t equipped to be an arrogant type of team, even against an inferior opponent like Buffalo. They are not the Colorado Avalanche or Vegas Golden Knights. Iâ€™m not saying those clubs play like that, but theyâ€™ve got more firepower and how should I say this â€” star power â€” to sometimes let up in their game and play with a bit of that frame of mind.

Working for every inch and being the club that shows effort each shift is the Islandersâ€™ MO. Thereâ€™s also swagger, which weâ€™ve seen them have during games, but thatâ€™s a far cry from the kind of performance that took place over the final 40 minutes.

In the end, this could be all turn out to be a very valuable lesson and does more harm than good for the Trotzâ€™s skaters. Matt Martin said it perfectly when saying him and his teammates were â€œhumbledâ€. The Isles get a chance to right that wrong against the same Sabres squad tonight.

But playing with arrogance isnâ€™t in the Islandersâ€™ nature. Let this be a one off and it never take place again.

If there was one guy who didnâ€™t stop playing while the Islandersâ€™ game faltered as the night wore on, it was Adam Pelech. Once again he was fantastic, and at times looked like he was trying to do it all by himself.

Adam Pelech is on another level tonight. Watch this. #Isles pic.twitter.com/lHY3gVl0Mr

Pelech had a goal, assist and was +2 in the loss.

Semyon Varlamovâ€™s shutout streak finally came to an end last night after an astounding 248 minutes. Itâ€™s wild to think that might not even be the most impressive feat heâ€™s been able to accomplish in this truncated season.

Varlamov has a league-leading seven shutouts, three of them which came in a row before he allowed three goals on 40 shots last night.

He should be one of the favorites to win the Vezina Trophy.