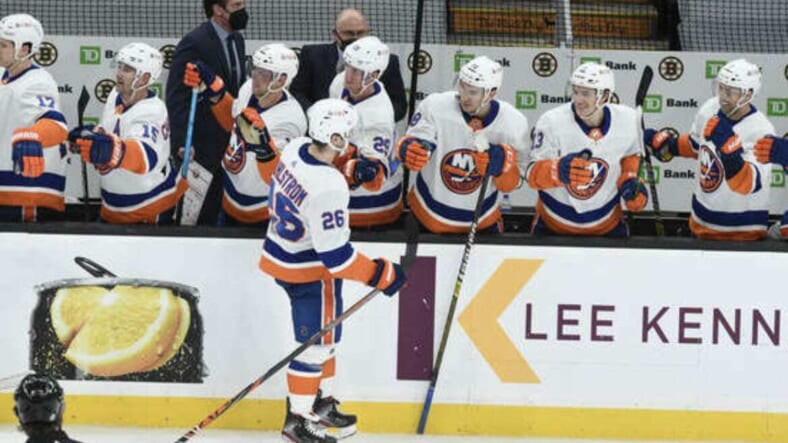 As the Islanders have sputtered a bit of late â€” 3-4-0 â€” in their last seven, the pressing need for more offense has reared its ugly head again.

Everyone has been screaming for g.m. Lou Lamoriello to make a deal to help at least solve some of the problem. Fact is the trade deadline is still 13 days away and Lamoriello biding his time and looking over all his options. After all, his most favorite quote goes, â€œIf you have time, use it.â€

But now as the Isles begin a crucial six-game homestand which includes two matchups with the division-leading Capitals and the high-powered Rangers, they are going to need their first line to show out. And as weâ€™ve seen since Anders Lee went down a few weeks ago, that line has not had the same impact they were having all season. Head coach Barry Trotz has tried to find the right formula and given Leo Komarov and Kieffer Bellows chances there. Both have been unsuccessful.

So with that said, there might be one option left: giving rookie Oliver Wahlstrom a shot on the top line.

Wahlstrom has proven heâ€™s game for playing in big spots. He was on the ice last week with the Islanders trailing in Philadelphia and with the game tied against Boston, and was the one who ended up getting goals on those shifts. Furthermore, heâ€™s shown an edge to in his style of play that mirrors a bit of how Lee is looked at. Watching the freshman sensation for close to 30 games already, heâ€™s enjoys the physical element and get in the dirty areas, and he hasnâ€™t been afraid to throw his 6â€™2, 205-pound frame around.

Oliver Wahlstrom. He did it again. My goodness! pic.twitter.com/M1SAMOsEus

Aside from how it would be a nice promotion for the 20-year-old, and showing how much faith the coaching staff has in him, both Barzal and Jordan Eberle would benefit from a presence like Wahlstrom brings. Wahlstrom could open up more space and allow Barzal and Eberle to flex their offensive muscles that have been taken away as of late. For someone who loves to dish it (Barzal) and Wahlstrom (rip it), the two would be a formidable duo. The line as a unit would also gain from the added jump No. 26 has. With all due respect to Komarov, heâ€™s not built to play first-line minutes, neither from a skill or in speed perspective. Wahlstrom provides both in bunches, as seen from the success heâ€™s had playing with J.G. Pageau a majority of this year.

â€œHis attitude is top-notch on and off the ice,â€ Pageau said of Wahlstrom last month. â€œHeâ€™s doing the right things and paying attention to all the details and thatâ€™s how you get betterâ€¦ Heâ€™s doing everything possible to be apart of this team.â€

The Islanders have reached a point where something needs to be done to improve their attack. Their options are limited and some of what they thought were solutions â€” especially for their top line â€” clearly havenâ€™t panned out. But one they havenâ€™t tried yet is Wahlstrom being on the first line.

They might be smart to experiment with that idea starting now. They need a spark.

Nick Leddy recorded another assist on the lone Islandersâ€™ tally Monday night in Pittsburgh. That gave him four apples in his last three games and 24 total on the season. His career-high is 35, which came back in his third season with the organization back in 2016-17.

With 19 games, itâ€™s not out of the realm that he passes that career best stat.

Itâ€™ll be interesting to see if Barry Trotz goes with Ilya Sorokin tomorrow night against Washington. Semyon Varlamov has gotten all the starts when the two teams have met this season, and has yet to record a win. Sorokin himself is coming off a rough performance on Saturday where he gave up four goals on nine shots and was pulled in a 6-3 loss to the Pens.