Islandersâ€™ third line allowing team to do what it does best 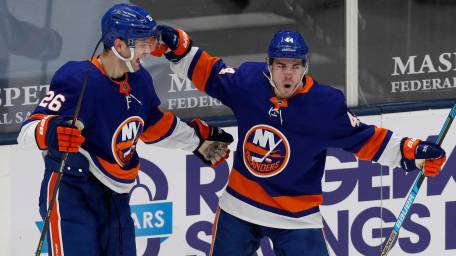 Thereâ€™s two things that have made the Islanders the kind of team they are today: defense and the ability to roll four lines every night.

The latter is something which has become more of staple with how the club generates their offense, despite a lack of overall skill in that area. And early on this season, that lack of both those intangibles was really hurting them. But things in that department have taken a turn and the Isles are receiving that four-line attack and itâ€™s backed up behind the hot play of the third line.

The trio of Oliver Wahlstrom-J.G. Pageau and Leo Komarov/Michael Dal Colle has been arguably the best for the Islanders during their 6-2-2 run in their last ten games.

Wahlstrom, the 20-year-old rookie, is riding a four-game point streak (a career-high) into Tuesdayâ€™s nightâ€™s tilt in New Jersey; heâ€™s got five points in that span. Pageau is scoring at a clip, with one goal after another. Heâ€™s now tied with captain Anders Lee for the team lead in goals with nine.

â€œHeâ€™s just an unbelievable guy,â€ Wahlstrom said in praising his linemate Pageau last week. â€œHe took me under his wing right awayâ€¦ Itâ€™s fun learning from him and heâ€™s been a huge help. Heâ€™s been getting my confidence up.â€

Overall that line is clicking in a way it needs to be after the black hole it was the entire regular season prior to this year and the nightmare it was to this season. Their emergence has taken the pressure off the top two lines from having to carry the attack every night. Additionally, theyâ€™ve provided another group of forwards that head coach Barry Trotz can throw out in any situation. And that has translated to winning.

Weâ€™ve seen before how hard of a team the Islanders are to play against when theyâ€™ve got four lines all going at once. It was the backbone of their resurgence two years ago and was what drove them to the Eastern Conference finals in the bubble last summer. Now that theyâ€™re getting that part of their game on a nightly-basis once again, who knows what happens from here.

It will at the very least instill some fear into the opposition as to what their offense is capable of. And itâ€™s because the third line has now become a significant presence.

Theyâ€™re helping to do what makes the Isles be their very best and that canâ€™t be understated enough.

The Islandersâ€™ power play finished the month of February as the top unit in the league going a teriffic 9-for-22. Right now itâ€™s the second unit that is on fire, with Wahlstromâ€™s rising as the key to its success.

“His confidence just continues to grow and he just looks better and better,” said teammate Josh Bailey. “He obviously has that big shot, which we saw tonight, abut playmaking too, for us, to use the whole zone has really opened things up. We’re comfortable going to either side and making plays.”

Mathew Barzal is back to his old ways after going four-straight games without a point. He didnâ€™t record a point on Sunday, but he does have three points in his last two games. With the Devils on the schedule tonight, Barzal will be the one to watch.

Heâ€™s already notched three points against the Devs this year and has ten points in 12 career games against them overall.