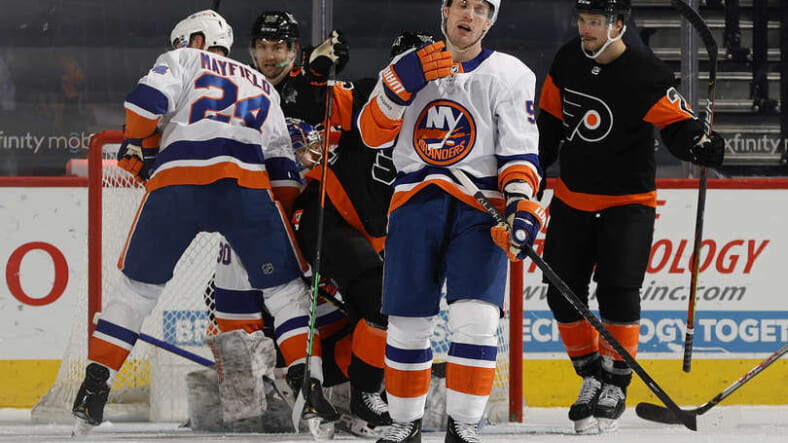 News came out earlier this morning that the Islanders game against the Buffalo Sabres which was scheduled for tonight was postponed due to COVID-19 protocol. Itâ€™s the first snag the Isles have had to deal with when it comes to the virus this year. The development places no fault on the Islandersâ€™ part but more on their opponent after they played the Devils â€” who had several players who were in the game test positive over the last day or so â€” on Sunday.

With these extra couple days of possibly not playing, the Islanders could some soul-searching and reassess whatâ€™s gone wrong with their season thus far.

This campaign has not gotten off to the start many were hoping for after the team made it to the Eastern Conference finals in the summer. At 3-4-2, the Islanders sit in seventh place in the MassMutual East Division. Theyâ€™ve lost five games in a row, all in variously gut-punching fashions; the latest coming Sunday night in overtime in Philadelphia after Mathew Barzal took a bad high-sticking penalty. Furthermore, theyâ€™ve received inconsistent performances from two of their most important forwards, Brock Nelson and Josh Bailey.

Nelson through nine games has just three points, ditto Bailey. Bailey did finally score his first of the year on Sunday but heâ€™s been extremely quiet outside of that.

Beyond those individuals, the Islanders really need to find themselves again. There have been spurts where theyâ€™ve dominated, but theyâ€™ve mostly had trouble being that club that excels at even strength. There lies a huge problem.

One of the Islandersâ€™ keys to their â€œidentityâ€ and overall success in recent seasons has been their ability to outwork their opposition at 5-on-5 and being defensively sound. Thatâ€™s been seen less than expected in a majority of the games the Isles have played this season. They also havenâ€™t been helped by having to depend on two lines most nights.

Special teams they can also use a reset. The penalty kill has been ok, but does sit in the bottom-half of the league. The power play? Also in that category. But they still look befuddled on the man-advantage most of the time. Zone entries continue to be a major problem, which has gone on for a long time. On this latest five-game trip, they went 2-for-18 man up. Thatâ€™s awful and just isnâ€™t going to cut it.

Head coach Barry Trotz said today that special teams would get much of the focus depending on the schedule this week. Good.

Thereâ€™s been positives â€” Mathew Barzal, Noah Dobson, the kids (Kieffer Bellows and Oliver Wahlstrom) looking spry and Semyon Varlamovâ€” but a lot of why the Isles sit where they are currently is attributed to not getting enough effort and uncharacteristic play.

That can be fixed. Weâ€™ve seen it before.

And they should take this extra time this week to do so.

Kyle Okposo will always have a special place in the hearts of Isles fans. He also knows how much the arena saga has worn on the franchise and the fans. This quote he made to NHL.comâ€™s Brian Compton yesterday tells you all you need to know how much the current Sabre still appreciated the Coliseum and his thoughts on the organization finally getting their new home.

â€œIt’s going to be tough to see the old barn go. Nassau was a pretty cool arena; a lot of history there. But I’m sure the new site at Belmont is gonna be phenomenal. I know that they’ve been trying to do it for a long time.”