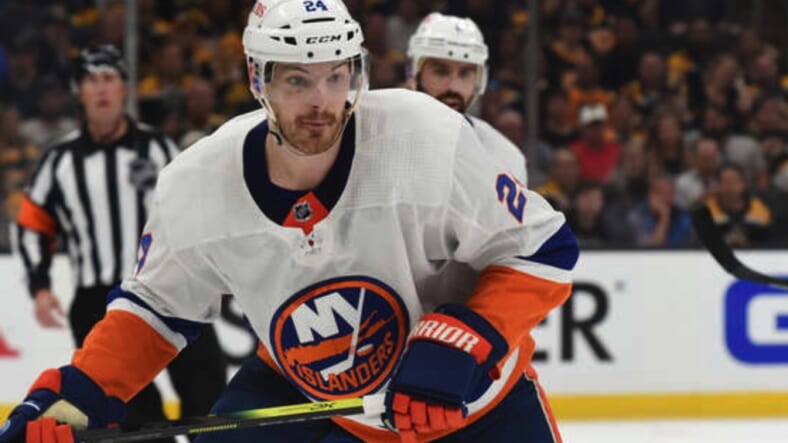 There was a common theme as the Islanders came away with their 5-4 win in Game 5 last night.

Defenseman Scott Mayfield seemed to be everywhere. NBC’s Pierre McGuire, who was inside the glass in Boston, seemed to point out how excellent the 6’5, 220-pound was each shift he was on the ice.

“What a tower of power Mayfield has been on the backend,” McGuire uttered during the third period after Mayfield made yet another heads-up play.

Mayfield was clearly the Isles’ best defenseman on Monday evening. Even after taking a clear elbow to the head early in the game from the Bruins’ Nick Ritchie early in the game, Mayfield racked up 24:13 of ice time, blocking five shots and registering one takeaway. His impressive play with the Islanders still up by two in the third — intercepting a David Pastrnak pass that was heading straight for David Krejci who was darting straight for the net — stopped a potential scoring chance.

Scott Mayfield continues to be outstanding these playoffs #Isles pic.twitter.com/f6nu2Q0pth

That breakup was just one of the several key plays at big moments Mayfield has been in the middle of in what has been a tremendous postseason for him to date.

Mayfield it can be argued has been the Islanders’ best defender in the playoffs outside of Adam Pelech. He’s second on the team this postseason for a d-man in points and assists. Rookie Noah Dobson leads both those categories shockingly. At both ends of the ice and on the penalty kill, Mayfield has flourished. The fight game has also shown from the 28-year-old, as proven by his walloping of Taylor Hall in game four.

“It’s kind of physicality meeting each other,” MayfieldÂ said. “We both play hard, straight line hockey. It’s a battle, I think the series has been great so far. We want to bring that physicality and I think we’re doing a good job right now.”

Taylor Hall chooses Scott Mayfield for his first fight in over a decade #Isles pic.twitter.com/aDJQQ2QdkF

Mayfield contributing a strong postseason couldn’t have come at a better time for himself, both with the Seattle expansion draft coming soon and the duo of him and Nick Leddy struggling to find their footing on many occasions during the regular season. He and Leddy were made a pair in training camp after his original partner, Devon Toews, had been dealt in the offseason to Colorado.Â  They have had their couple of down moments in the Islanders’ run thus far, but Mayfield individually has made up for it with some monster performances.

â€œHeâ€™s a defender, a hard guy on the defensive side of the puck number one,â€ Trotz said previously of Mayfield. â€œAnd then he does contribute offensively at a pretty reasonable rate pace for what I would consider a defender type of guy. Heâ€™s just grown his game on the ice and then off the ice heâ€™s extremely well respected by his peers and his teammates. He can play the game in a physical way and he can play the game against the top skilled guys in the league and feel comfortable.â€

The Islanders now sit one win away from advancing to the third round for a second consecutive season. Scott Mayfield has played a critical role in that happening.

If you asked anyone before the postseason began who the Islanders’ team-leader in goals would be, no one in their right mind would have said Kyle Palmieri. Yet here we are on the day before Game 6 and he’s got six in 11 games. To say that’s remarkable would be an understatement considering he had just two in 17 regular season games after the Isles traded for him at the deadline.

Palmieri is an unrestricted free agent after this season ends. With the way he’s playing right now, it could very much be Palm Island on Long Island if things continue the way they’re going.