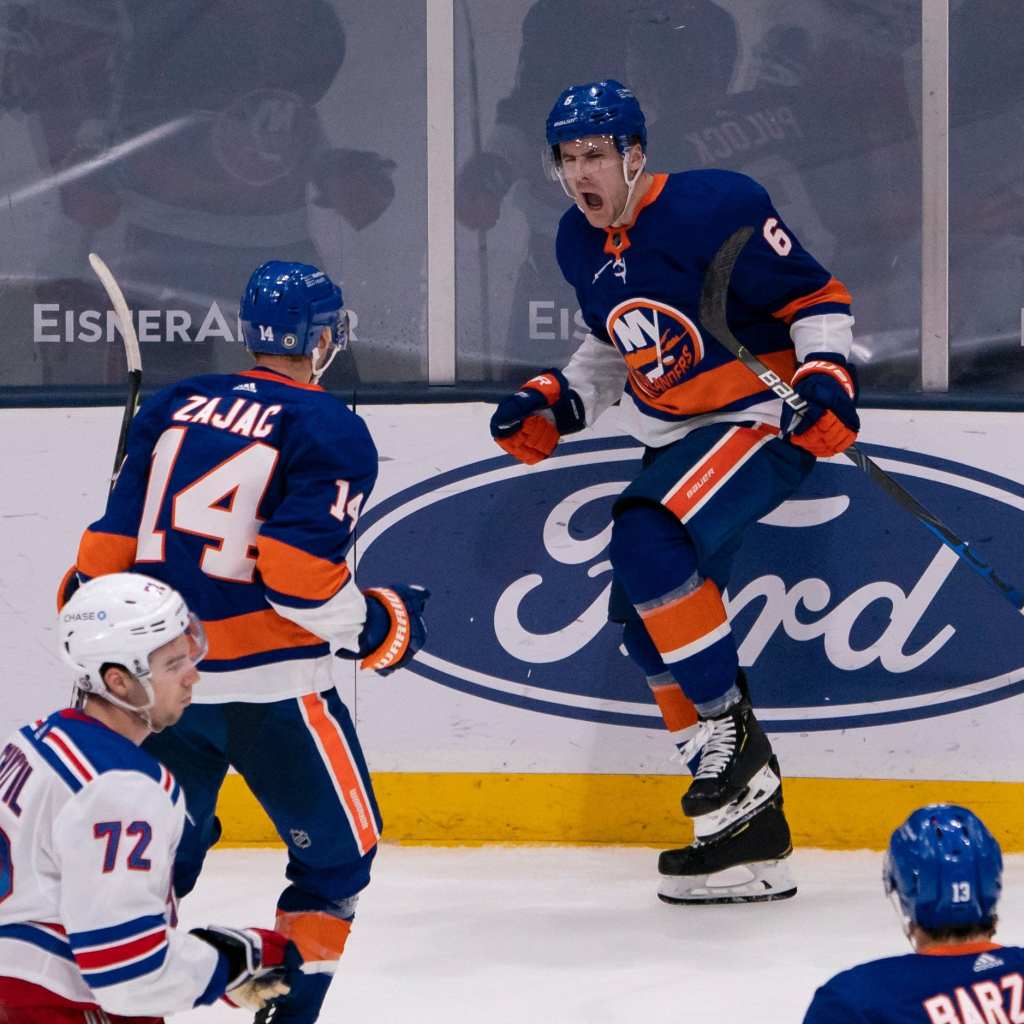 It took over three-quarters of this abbreviated season, but Ryan Pulock finally has a goal to his stat line. Pulock’s tally, the game-winner in the Islanders’ OT win on Sunday night against the Rangers, finally got the monkey off his back after he had been snakebitten all year.

With that elusive marker, there’s not just a sense of relief but hopefully some confidence that Pulock will start to hit the net more as the season winds down in the next few weeks.

“Obviously for me, throughout my career I’ve been able to score a little bit,” Pulock said postgame on Sunday. “To go through a little slump like that is tough, and as the games wore on, it got tougher. I knew I just needed to get that one and obviously it came in a big moment. I’m excited about that.”

Pulock had come into this season with big expectations after a very solid postseason and a brand new two-year, $10 million deal in his back pocket. Providing extra offense was one of added pressures of his new contract, that in part because he had registered 29 goals the last three seasons. The Isles had also parted ways with their best offensive d-man Devon Toews dealing him to Colorado in the offseason too, which was only going to put more work on Pulock’s plate.

After the first six games of the season, you could sense a theme that the Winnipeg native was having trouble converting. Pulock had already recorded 11 shots in that time. Those stretches became weeks. Weeks became months. The frustration for the 26-year-old and among the fans reached an even bigger point because outside of scoring, Pulock has been playing the best hockey of his career. But the fact still remained: everyone else on the Islanders’ defense besides Pulock — outside of Thomas Hickey whom played a few games — had scored.

What made everyone scratch their head more was it wasn’t like Pulock wasn’t getting chances. Before Sunday’s winner, Pulock had recorded 90 shots, third-most of any player on the club all season and team-leading in terms of defense. If that doesn’t show he was due, I don’t know what will.

RYAN PULOCK! His first of the season wins it in OT! pic.twitter.com/mha1lsqca6

Pulock’s grip on his stick should be a little looser with that first goal in the rear view. It should lead to a few more goals for him before the regular season ends next month. The Islanders could certainly use his scary shot as their power play has struggled again of late, but also knowing the team has only received two goals from a d-man in regulation out of the last 12 games. Those came off the sticks of Sebastian Aho and Andy Greene.

The Islanders are a better team when Pulock is able to score when he’s given opportunities. They’ve been good this season even without that element. But Pulock is finally on the board now. That should be the spark needed for his scoring touch to show out again. And if that’s the case, the Isles will have another advantage at their disposal.

The Isles getting their three-day hiatus might have come at the perfect time. Having played three games in four nights, five in eight days, the team looked a little tired over the weekend against the Rangers. The break should also be crucial for newly acquired Kyle Palmieri, who scored his first as an Islander on Sunday, and Travis Zajac to get more associated with the team and head coach Barry Trotz’s systems.

Both TSN and The Athletic named the Islanders one of their winners of this year’s trade deadline. Hard not to agree as g.m. Lou Lamoriello addressed every area of need and gave up very little doing so.

Mets Survive and Win 3-1 Despite Losing Walker and Pillar