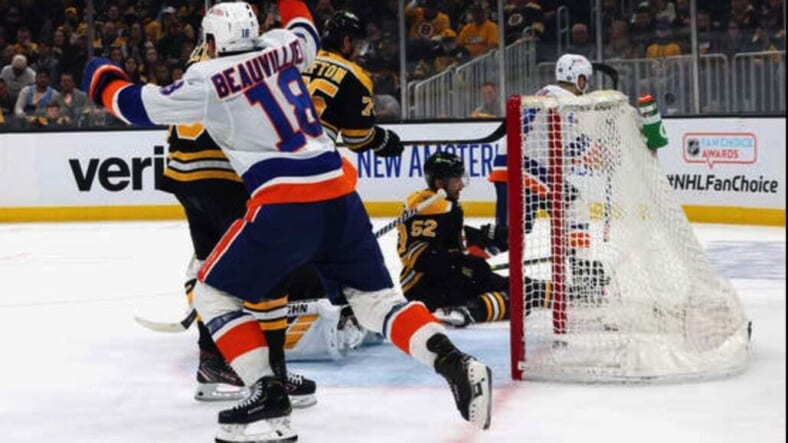 To beat a team like the Boston Bruins especially in the playoffs, having terrific special teams goes a long way for the Islanders. Monday night was full proof of that, especially the power play.

In game one on Saturday, the Isles found themselves on the wrong end of that spectrum, as Boston went a perfect 2/2 on the man advantage. Last night the tables were reversed, and it was the Islanders whose usually sporadic power play came up huge in their 4-3 overtime win to even their second-round series at a game apiece.

They converted two of their three chances man up last night. And they did it not without getting a little luck in the process.

On their first goal, Josh Bailey came down the far wall, stopped and threw a puck that ricocheted of Boston’s Jeremy Lauzon skate and straight through Tuukka Rask’s five-hole. That moment would not be the only unfortunate thing to happen to Lauzon; his failed cross-ice feed that hit a teammate skate led to Casey Cizikas’ breakaway in overtime to win the game. But back to that goal.

Both power play units were moving the puck very well before Bailey’s tally, much to the chagrin of many who’ve seen how anemic the Isles have been in that department. They weren’t making it easy for a Bruins penalty kill, which is one of the best in the league. That should be the game plan moving forward.

J.G. Pageau was responsible for the other goal on the man-advantage. Only his marker was a thing of beauty and the kind of play the Islanders love to draw up. “It’s part of our game plan,” said Pageau in the postgame. “Rask is a good goalie, so we need to bring traffic around him, put a lot of pucks on net, win some battles around the net and we were able to do that.”

Pageau’s goal gave the Isles their third power play goal of the series, which has the Isles now at 50% in that category through two games. Some might not realize that’s a massive improvement from not just the previous series with Pittsburgh — just three goals on 17 attempts — but also the regular season. The Islanders finished the season in the bottom ten (20th) in of the league after the 56-game slate concluded, according to covers.com.

If the Islanders can keep up at the rate they’re going through the first two games, it will help their chances tenfold in winning this series. But last night’s performance man-up, in particular, should give them some extra confidence heading into game three on Thursday night.

Casey Cizikas’ goal won the game for the Islanders, but the stop made by Semyon Varlamov minutes earlier on Taylor Hall might have been even larger in the grand scheme of things. Hall looked like he was ready to send the series back to Long Island with his team up 2-0 before Varlamov sild to stop him on the doorstep.

It was one of Varlamov’s 39 saves on an evening where he was outstanding. “[Varlamov’s] a veteran, he’s not scared of these moments, and he’s been a rock for us all year,” Barry Trotz said. I mean, I hope he gets a ton of votes for Vezina, at least be a finalist. He’s been one of our MVP’s this year.”

As of this morning, Varlamov was not one of the three finalists for the Vezina Trophy despite playing 36 games and being ranked third among goalies in goals against, first in save percentage, shutouts, games started quality starts (yes that’s a real category) and Goals Saved Above Average (GSAA).