Islandersâ€™ poor starts lately affecting them where it hurts the most 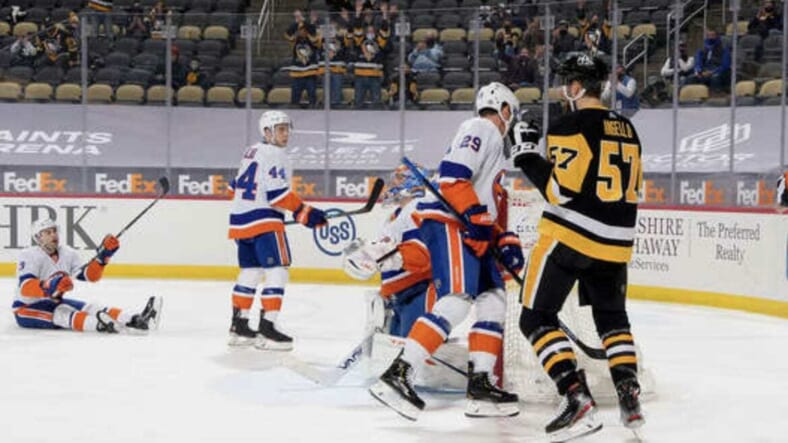 The Islanders came away with no points last night as they were defeated 2-1 by the Pittsburgh Penguins. Despite them dominating the final 40 minutes of the contest, it was once again another slow start which doomed them early.

This is becoming a concerning trend, one where itâ€™s hurting the Isles where it matters most: in the standings.

“We’re not getting off to the best of starts,” said forward Matt Martin, whose goal was all the Isles mustered offensively last night. “We have a lot of character in the room. We eventually get to our game, find our game and there’s no quit in our game, but it’s not a recipe for success in this league to play from behind.”

Monday nightâ€™s defeat marked fifth time in their last six games outside of their 6-1 smashing of Philadelphia the Islanders dug themselves a 2-0 hole; this recent loss being the third straight game itâ€™s happened in the opening period. Slow starts are common during the grind of an NHL season, but those types of numbers arenâ€™t doing the Islanders any favors.Â They got lucky last Monday because of Ilya Sorokinâ€™s heroics and because of the Flyers ineptitude, and last Thursday in Boston on the back of Semyon Varlamov and their excellent penalty kill.

It's #LetsGoPens who strike first on the power play. pic.twitter.com/j2peLwDDZb

Even with the cushion the Islanders have given themselves in the East â€” itâ€™s a ten point gap between them and the Â fifth-place Flyers â€” their starts lately have cost them premium points to keep pace with the division-leading Capitals. Washington seems to not lose at all now, having won ten of their last 11 games. Now granted, the Isles are still in second place as of this morning. But Pittsburgh has turned their season season around and are tied with them after last night. The season series is done between the two teams, something that could be a blessing in disguise for the Isles.

Still, the last two games and this recent stretch leave you a bit worried because as we know the teamâ€™s offense sometimes doesnâ€™t have the firepower to get back into games. There is such a small margin for error because of their style of play. That dynamic is only ratcheted up more because of captain Anders Leeâ€™s absence.

The Islanders are at their worst when they are chasing the game. They seem to be doing it almost every night. It was evident during the first stanza against Pittsburgh and it put them behind the 8-ball in another crucial spot.

With Washington up next, the Isles canâ€™t afford to let this trend continue.

These last 20 games are going to be a dogfight for positioning as the postseason approaches. Starting of games in the wrong manner have compounded in leading to the Isles losing important games and being able to keep compiling points.

It need to change and it has to be now.

The Islandersâ€™ faltering a bit over the last few weeks â€” one regulation win their last six â€” hasnâ€™t been for the lack of trying, but their attack has stymied after what was a terrific month prior. Some of the outlying numbers of late arenâ€™t very encouraging:

Matt Martin continues to have an excellent season. The lone power play tally was his sixth goal of the year. As Brendan Burke pointed out last night too, the goal was just the second power play marker of his 11-year career.