Islanders’ own “French Connection” were outstanding in first round series win 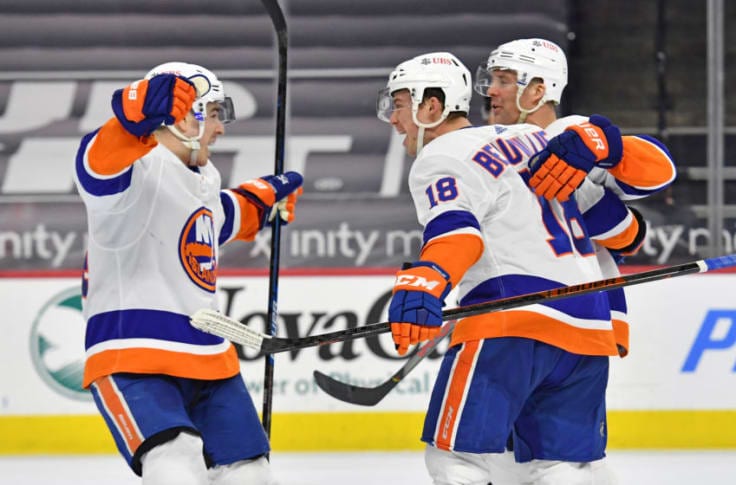 The Islanders are moving on to the second round after beating the Pittsburgh Penguins in an entertaining six-game series. They had all hands on deck in the clincher last night, scoring five goals and not succumbing to the relentless pressure from the Pens especially when they emerged with a two-goal lead.

A few players can be looked at for the Isles’ opening round performances as the reason why the Isles advanced, but their own French Connection — J.G. Pageau and Anthony Beauvillier — in particular were tremendous from the outset. Pageau and Beauvillier tied for the team lead in points for the first round with seven.

Both were responsible for huge goals and made key plays throughout the series. Pageau’s flutterer past Pens netminder Tristan Jarry in the third period of game one tied the game and helped set in motion the Isles titling the ice the rest of the contest and into overtime before Kyle Palmieri’s game-winner. A majority of his club-leading six assists in the series were secondary helpers, though they all came when the team needed it the most. Pageau was also excellent in how he was able to combat Sidney Crosby and some of Pittsburgh’s other weapons.

â€œIf you look at the two trade deadline acquisitions, last year Pageau, this year Palmieri, theyâ€™re veteran guys that are proven,â€ Barry TrotzÂ said after game one. â€œWhen it comes to playoff hockey, in big moments you rely on their experience, their character is exceptional.â€

As for Beauvillier, I had written yesterday that he just finds another level in the postseason. Throughout this series — and truly in the last three games — he was exceptional. The argument can be made Beauvillier was the Islanders’ best forward in the opening round. Not many would disagree. Pittsburgh’s defense had no answers for him with his speed and sneaky style.

Beauvillier saved his best for last night with a three-point performance that included getting the game tied early and assisting on Brock’s Nelson two goals. Both which I might add were gorgeous.

“Beau is a great player,” Nelson said of his linemate after the game. “Playoffs is a different animal. It might not always be your night, but we always talk about the depth we have in here. Different guys can get it done in getting us momentum or winning us a game.”

The connection between Pageau and Beauvillier and their ability to thrive in the playoffs isn’t even new.Â  Actually it began before they were in the bubble last summer when they were linemates. That continued early on in the Isles’ run before the two settled into their second and third line spots respectively. But even on different lines in this past series, the two were dominant in their own different way.

Now with the Boston Bruins posing coming next, the Quebec natives will have their hands full once again. It should be pointed out though that Pageau was great against Boston in the regular season with eight points in eight games. So he could very well be the x-factor going in. That’s something to think about when the two teams most likely start their series this weekend.

But for now, people can reflect on his and Beauvillier’s fantastic showing against the Pens.

Travis Zajac had to wait his turn to get back into the lineup last night, and boy he made most of it. If not for his goal-saving play on Kasperi Kapanen late in the first period, the Islanders don’t get to the end of the first period tied. His crucial faceoff win set the stage for Ryan Pulock’s rocket which turned out to be the game-winner and made it two goals in 13 seconds to give Isles the lead.

Said Zajac after the win: “I’m here to help any way I can and be a part of it any way I can. Like everyone else, when my name is called you have to go in and do the right things and play winning hockey, control what you can control.”