Islanders now have possible layout for Ilya Sorokin’s next contract 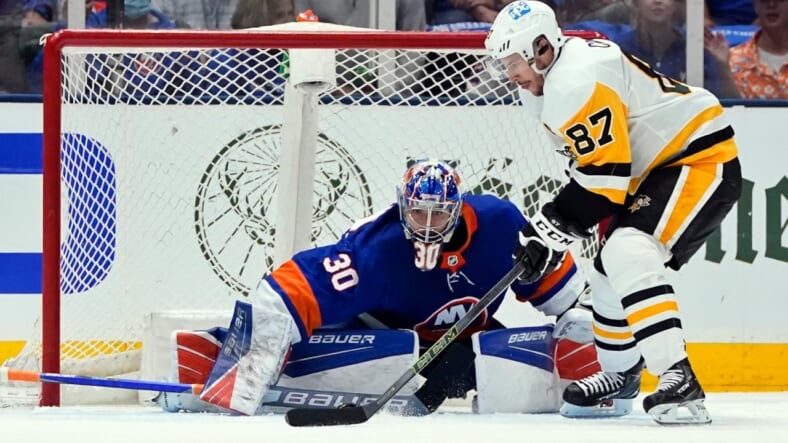 The days just keep on passing, and still, we have not heard a peep from the Islanders. General manager Lou Lamoriello has literally driven the entire league mad (no seriously) and has the fan base still waiting with anticipation that new deals for several key names will be announced soon. Other teams continue to fill up their rosters with their own restricted free agents and those players still on the market.

That includes the Islanders’ division rival just a few miles away in Manhattan, the Rangers. USA Today/lohud.com’sÂ VincentÂ  Mercogliano reported yesterday the Blueshirts were on the verge of locking up starting goalie Igor Shesterkin to a long-term contract that would pay him close to $6M a year.

So how does this have any effect on the Islanders? Well, Shesterkin’s latest deal might be a layout for Ilya Sorokin, his fellow countrymen and backup to starter Semyon Varlamov.

The length of Shesterkin’s contract — which Mercogliano pointed to being between five and six years — seems like the ideal amount for Sorokin. Sorokin turns 26 tomorrow and by the time that contract would end, the Mezhdurechensk native would be nearing age 32. In that time, the Islanders are expected to compete for a Stanley Cup while also finally handing him the keys as their franchise goalie who would be in his prime.

Sorokin just finished a very successful first campaign playing in North America. He came into his own in the regular season forming a terrific one-two punch with Varlamov and played a key role in the team’s run in the playoffs. He was an RFA coming into this offseason after his first contract he signed last summer expired at the conclusion of the postseason.

The Islanders also see Sorokin as next in line to succeed Varlamov. Varlamov is signed for another two seasons at $5M per with him holding a modified no-trade clause, according to CapFriendly.com.

Now speaking of money, Mercogliano said the number would come between the $5.75-$6M range. That sounds pretty steep for a goalie who only has 47 career games to his name. Sorokin has played less than that but has found more success in an even a shorter amount of time. But it would be unthinkable for Lamoriello to offer that amount to Sorokin knowing that he would then have two goaltenders racking up close to $12M of cap space and still having to deal with a flat cap situation.

Sorokin did say in a lengthy chat with a Russian news outlet over the weekend he was hoping to have a new contract in the next few weeks. He acknowledged he has no desire to go back to the KHL as well.

The interesting thing is Sorokin can very well return home if the Islanders were to offer him one-year deal for this upcoming season. That seems highly unlikely based on how close the Isles are to a championship, but also that they don’t have many candidates behind Sorokin who could jump right into the NHL. Jakub Skarek probably seems to need a few more seasons in the AHL. Beyond that, most of the goalies in the system are recent draft picks still in juniors or playing at the college level.

Sorokin is obviously the Islanders’ future in net and he enjoys playing for the organization. His next contract could have the same look as Shesterkin’s in many ways. We’ll know soon on when the two sides come to an agreement. That said, the Isles now have an idea of how they can get it done.