Islanders dealing with uncharted waters as class of the East Division 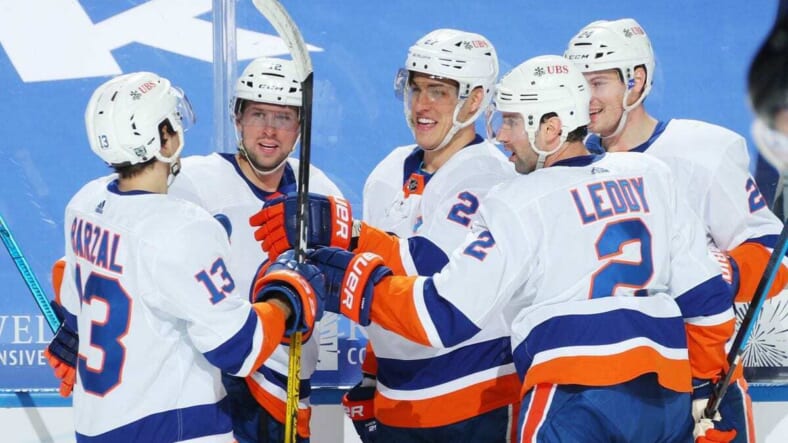 As time has continued to pass under the Lou Lamoriello-Barry Trotz regime, what was once unfamiliar territory has now become common place among the Islanders â€” they are now considered one of the top dogs of their division.

This year has only reinforced the notion with the Isles sitting just two points behind the first-place Capitals with a game in hand entering their game Thursday night in Boston. Their success in recent years has caught the eye of many of the pundits who watch the sport night in and night out. In addition, their recent moves Â â€” trading for forwards Kyle Palmieri and Travis Zajac â€” have also put them in another light. So says NHL Network analyst Kevin Weekes.

â€œGame in and game out for me itâ€™s the Islanders,â€ Weekes acknowledged last night during a rountable discussion. â€œDonâ€™t get me wrong, there are other teams that can outscore them. Pittsburgh can. Washington can. But the thing I like about the Islanders is consistency. I know what Iâ€™m getting game to game, shift to shift for the most part. Itâ€™s a testament to their team, Lou Lamoriello â€” canâ€™t say enough about him, Barry Trotz and that coaching staff.â€

Hearing that about the Islanders almost feels like uncharted territory in a sense.

For almost two decades before the franchise had its renaissance in 2014-15 and 2015-16, the Isles had come nowhere close to being considered one of divisions best â€” first in the Atlantic then Metropolitan. Things were that way thanks in large part to having to deal with the greatness of the New Jersey Devils, who ironically were run by Lamoriello for close to 20 years, and then being subjected to being the punching bag of the Sidney Crosby-led Penguins and Alex Ovechkin-led Capitals.

Only since Lamoriello and Trotz arrived in the summer of 2018 has the organization been able to close that once sizable gap. Theyâ€™ve even flipped the script, having swept the Penguins in the first round two years ago and defeating the Caps in five in the opening round in the bubble last summer. But the Isles still havenâ€™t been able to get over that proverbial hump of winning a division title. The closest they came was two years ago, where they fell one point short.

Itâ€™s been 34 years to be exact since the organization reigned atop the division at seasons end,Â 1987-88 in the old Patrick Division. Funny enough, the separation in points from first to last that year was a measly seven. This year has kind of follow suit as the the number of points from the top spot to the fourth and last playoff spot is eight.

Could that be an omen of sorts that the Isles will win it this year? Time will tell.

Theyâ€™ve put themselves in a favorable position to do so. But theyâ€™re also seen in a different light now.

The class of the East? Thatâ€™s the Islanders now. Â Itâ€™s something many are going to have to get used to.

The Islandersâ€™ success isnâ€™t just continuing on the ice, but off the ice it continues to flourish with each passing day. This morning, the team announced they had sold out 90% of their season tickets for next season at UBS Arena, the new home of the franchise.

The #isles announce they are now over 90% sold out of season tickets at @UBSArena. More details below?? pic.twitter.com/rXmWn39B2x

Having beaten their opponent, the Bruins, this evening five times already, the Isles can really put a dent in the Bâ€™s playoff hopes these next two games. Keep watch of J.G. Pageau and Kyle Palmieri as well. Theyâ€™ve been Bruin killers this season. Pageau has five goals and eight points in the season series; Palmieri has five goals and six points.