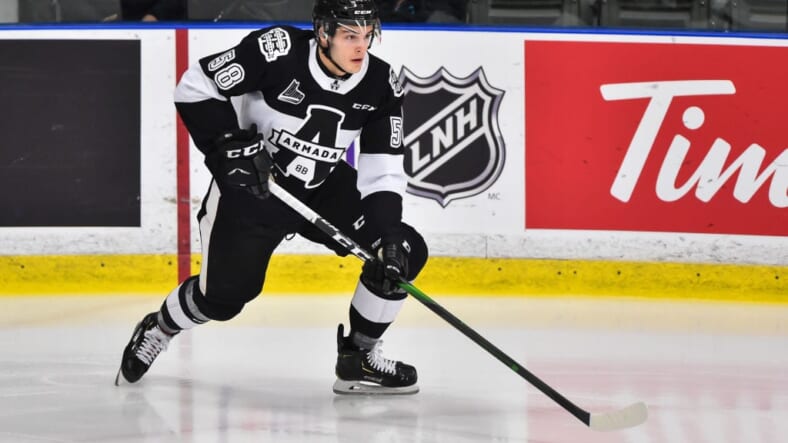 While the New York Islanders wait for their future in goal to sign on the dotted line, they continue to build up their defense for the future.

Yesterday, the organization announced the signing of Samuel Bolduc to his three-year, entry-level contract.

This past season, Bolduc starred for Blainsville-Boisbriand Armada and the Sherbrooke Phoenix in the QMJHL. Bolduc accumulated a career-high 43 points â€” 11 goals and 32 assists â€” which tied him for eighth among d-men in the Q while splitting time between the two clubs.

Already with four years in juniors under his belt before the coronavirus pandemic hit, and playoff experience from Armadaâ€™s 2018 run to the QMJHL Finals, Bolduc seems ready to turn pro. That might not mean he will be NHL-ready by the time this year hopefully resumes or even the 2020-21 season, but a shift to higher competition could be the next best thing for the Laval native.

As The Athleticâ€™s Arthur Staple noted yesterday, Bolduc is eligible to play in the AHL next season, whenever that may be.

Itâ€™s definitely a positive from the Isles side that being the case.

For one, they will be afforded the opportunity to do with Bolduc what they couldnâ€™t with rookie Noah Dobson this year. Dobson was ineligible to play in the AHL this season because he was 19 when this year started, and the rule states organizations either have to keep a player of that status on their current roster or send them back to juniors. The Isles kept Dobson the entire season instead of sending him back. Bolduc will also get valuable experience of learning the speed and grind it takes to be a pro. And finally, heâ€™ll get an opportunity to show his numbers in juniors will translate or be even better at a higher level.

Samuel Bolduc with a bullet to make it 4-3 #Isles pic.twitter.com/aRmoKIrtxc

The long-term outlook could also pay dividends for the Islanders if Bolduc turns out to be as advertised. G.M Lou Lamoriello and head coach Barry Trotz have built a solid foundation on the backend and have placed in a system that allows defensemen to thrive. Then thereâ€™s the fact the organization already have Dobson, who has number-one defenseman capabilities. They have Bode Wilde, who despite being hurt for most of this past year, is only 20, and still has a chip on his shoulder from dropping in the draft. Oh, donâ€™t forget about Adam Pelech and Ryan Pulock, just one of the most underrated duos in the league. Behind them are Devon Toews, Scott Mayfield, and Nick Leddy. You can even throw 22-year-old Parker Wotherspoon in time that mix if you want. Heâ€™s been building his stock up the last two years.

Thatâ€™s a barrage of young D. Add another mobile, rangy d-man in Bolduc who also has a cannon of a shot as a possible regular in a season or two, and the Isles could possess one of the best defensive corps in the league.

And can we talk about the size the Isles might be bringing to the table with Bolduc Â & Co. Bolduc himself in 6â€™4; so is Dobson. Mayfield sits at 6â€™5, while Pulock, Wilde, and Pelech are 6â€™2 and 6â€™3 respectively.

The Islanders arenâ€™t just trying to develop quality NHL d-men, theyâ€™re basically building a wall; a Long Island one at that.

The future of the franchise continues to get brighter as each day passes both on and off the ice. The Bolduc news is yet another building block for how the Islanders will sustain consistent success over the next five to ten years.