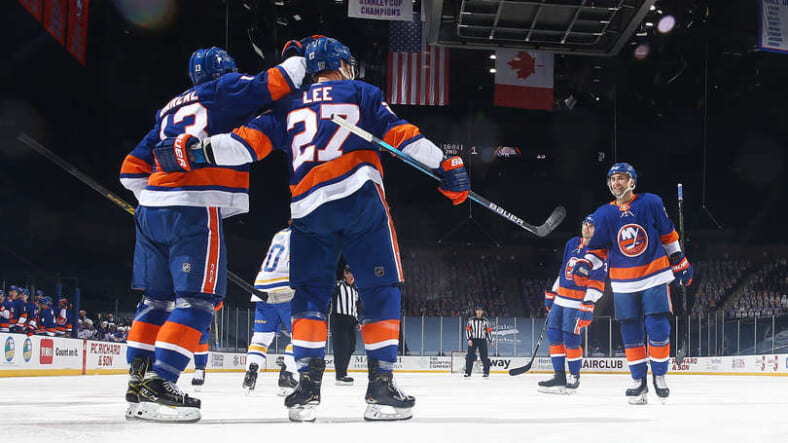 As the Islanders embark on their next nine games, they will have the advantage of playing eight of them on home ice. This is the perfect opportunity to distance themselves from the pack in the MassMutual East Division.

The friendly confines of Nassau Coliseum have been good to the Isles thus far this season. A 5-0-1 home record has them as one of the best in the NHL, even though theyâ€™ve played less home games than a majority of other teams. Theyâ€™ve been excellent despite there being no fans in the building; that is soon to change with Governor Andrew Cuomoâ€™s ruling earlier this month about allowing 10% capacity. When those fans are allowed back in the Old Barn, the Isles should get another boost.

But as weâ€™ve seen for a long time now â€” fans or no fans â€” the team continues to have success in their home surroundings.

“Everybody likes to be at home,” forwards Brock Nelson said earlier this week. “A little different environment, one youâ€™re more familiar with. Especially with the way the [COVID-19] rules and regulations are this year.”

The Islanders seem to be a different animal on home ice, both when they were playing at Barclays Center, and more recently back at the Coliseum. That could be thanks in large part to their overall team success over the last two-plus years. But some of it has been the result of creating their own home-ice advantage, something that was missing for the organization for a long time up until the last couple of seasons. Even on Monday night, their first game back at home after coming off a four-game road trip and not having their best game, they found enough to grab a 3-2 victory on J.G. Pageau’s power play goal late in regulation.
“You’re not going to have your best every single night, but you find ways to pull through and we have to take advantage of our time at home most importantly,” said Matt Martin postgame on Monday.
Next up for the Isles at home is the Boston Bruins, who are coming off their pasting of the Flyers at Lake Tahoe on Sunday. It should be another tough challenge, but the Islanders have beaten Boston both times they’ve hosted them on Coliseum ice this year. That in itself has been one of the most surprising things that has happened this season after how long the B’s have dominated when the two teams meet.
What’s not surprising is the Islanders continuing their trend of winning on home ice.
They have done it for a long time now and in a very impressive way.
—
Today marks the one-year anniversary of the Islanders trading for J.G. Pageau from the Senators. Pageau has been a fan-favorite from the moment he arrived, and his recent hot streak only continues to push the narrative that he was worth every penny g.m. Lou Lamoriello paid for him, which ended up being a first and second-round pick.
https://twitter.com/RTaub_/status/1364566170448314372
This from Barry Trotz: “Pager is a really good mentor for anybody in this league because he plays the right way. He’s a pro. He works with other guys. Those little things say a lot about the player and a person. He’s the ultimate pro.”