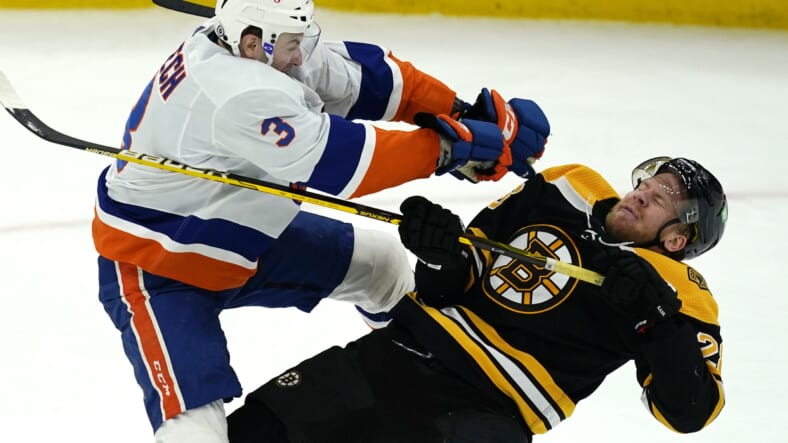 We’ve entered day three of free agency and everything continues to be hush-hush in and around the Islanders.

G.M. Lou Lamoriello and his confidants have put on a masterful display to not have let anything be divulged about any possible new deals in place with their key restricted and unrestricted free agents. Sooner or later though, the dam is going to break and we will either be treated to one piece of news or several transactions all at once.

One of those deals “hopefully” soon to be finalized is the long-term extension for d-man Adam Pelech. And there’s been plenty of talk about him asÂ his stock around the NHL continues to rise.

Sportsnet’s NHL Insider Elliotte Friedman was on the No Sleep Till Belmont podcast earlier this week with Islanders’ beat writer Arthur Staple to chat about the team when he was asked which player he’s watched from afar who has improved the most as during the organization’s success the last three years. His answer: Pelech.

â€œPelech is the guy,” said Friedman. “I didnâ€™t put him on my Norris ballot this year, but as I watched the playoffs more and more, I missed not putting him on.â€

Adam Pelech throwing his weight around early at Marchand pic.twitter.com/83mRQXPCdu

I had mentioned yesterday about Pelech evolving into a possible candidate to represent Canada at next year’s Winter Olympics. But this? How can you not say wow. That’s some extremely high praise coming from one of the most well-respected journalists and analysts in the sport whose word is gold. For Friedman to also mention Pelech and the Norris Trophy in the same light is incredible considering the 26-year-old’s place was on this team not even just four seasons ago.

It’s funny that expansion draft took place last week, because it was just that scenario four years ago where former general manager Garth Snow made the bold move to protect Pelech. Snow was berated by Isles fans for his decision, which now might have turned out to be the smartest thing he did during his tenure. The proof has been there for some time now the Islanders are not complete without his presence.

Pelech’s ascent to being one of the premier d-men in the league has been on a steady pace for a while now. Already the clear-cut No. 1 d-man on the Isles, he’s finally becoming the household name everyone needs to recognize.

While the silence has been defeaning on Long Island in terms of moves, a few miles away the Rangers have been very loud in the revamp of their squad under new general manager Chris Drury. The latest move being the acquisition of enforcer Ryan Reaves from Vegas last night.

The Islanders bullied the Rangers at the end of the regular season last year, and with Reaves now the newest Blueshirt, the rivalry between the two clubs just added some extra spice.

The Isles have history Reaves from the team’s past encounters in Vegas. Now they get to see him six times a year? Should make for some entertaining contests.