Ilya Sorokin exceeded expectations for the Islanders in year one 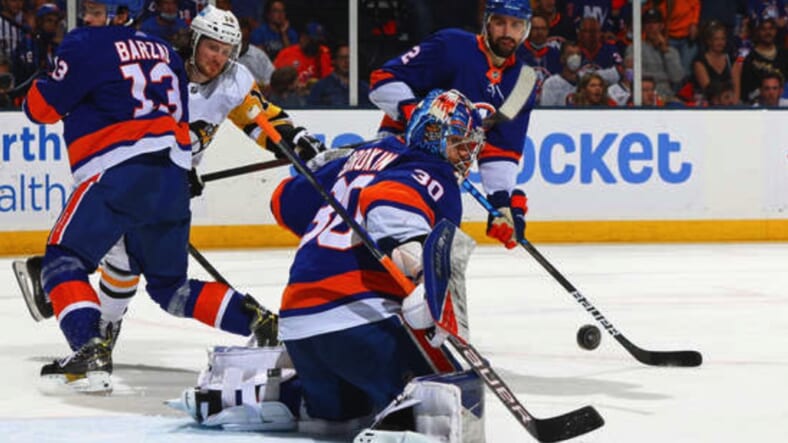 After waiting seven years for Sorokin”s arrival — he was drafted by the organization in 2014 — his excellence was finally put on display on the NHL stage. And boy did he not disappoint.Â Sorokin was everything as advertised that people both inside and outside the organization said he was expected to be.

Islanders’ g.m. Lou Lamoriello was on with WFAN’s Moose & Maggie yesterday following his end of the year conference call with the media and talked about Sorokin’s first full campaign in North America.

â€œHe came in and did everything we thought he was capable of doing,” Lamoriello said in praising the 25-year-old. “He certainly had success in the KHL. We knew of him as a person. His quality was indicative of him taking his English lessons on a daily basis from day one. Never missed a day no matter what.”

Lamoriello added: “His play, his work ethic in practice won over the players. So as I use the expression, he’s an Islander. There’s no question between he and Varly brought to our team on and off the ice.”

The Islanders’ goaltending was the backbone behind the team getting back to the Eastern Conference finals for a second straight year. Sorokin had an exceptional regular season, winning 13 of his 21 starts, recording three shutouts and posting a .919 save percentage. There was even a stretch from mid-February to late-March where the team went undefeated with Sorokin starting.

But it was in the playoffs when Sorokin officially arrived and etched himself into the franchise’s fabled playoff lore.

Ilya Sorokin: What a save on Crosby pic.twitter.com/Ee5rPfLEzt

Having to relieve Varlamov — who was dealing with a knee injury — Sorokin went a perfect 4-0 in the first round against the Pittsburgh Penguins, including an unforgettable performance in a 3-2 OT win in Game 5 in Pittsburgh.

“I will say this about Ilya, he is very calm,” head coach Barry Trotz said during the postseason. “Everybody loves him. He’s one of those guys that is extremely low maintenance. I do know this: He tends to his own game. He tends to how we play, but he doesn’t watch a lot of other games around the League. I think he’s a very intelligent young man. He’s got a smile on his face a lot, so you know that he’s got a good sense of humor with the guys. But he’s really relaxed. I think he’s very confident in what he is as a goaltender and also as a person. He’s a really low-maintenance guy.”

Although his final start in the postseason was a loss, and his last appearance was mop up duty in the Game 5 blowout in Tampa, Sorokin still was a great story all around for the Islanders. Sure he didn’t win the Calder Trophy — that honor belonged to Minnesota’s Kirill Kaprizov; Sorokin did receive a few votes — but the Russian native showed this stage didn’t intimidate him, which earned the recognition and respect from the critics and fans. A prime example was the fans chanting his name on the Nassau Coliseum concourse after the Islanders ended the series against Pittsburgh after Game 6.

That was a great moment.

Sorokin pointed out on Sunday he enjoyed this year, especially with the “Hey Josh Bailey..” chant during the playoffs and playing “under the Islander flag”. The feeling was definitely mutual for all those Isles fans who got to witness what they had only heard about for so long.

The future is bright for the organization, and Sorokin is going to play a major part of it. He lived up to the hype in year one and is only going to get better from here on out.