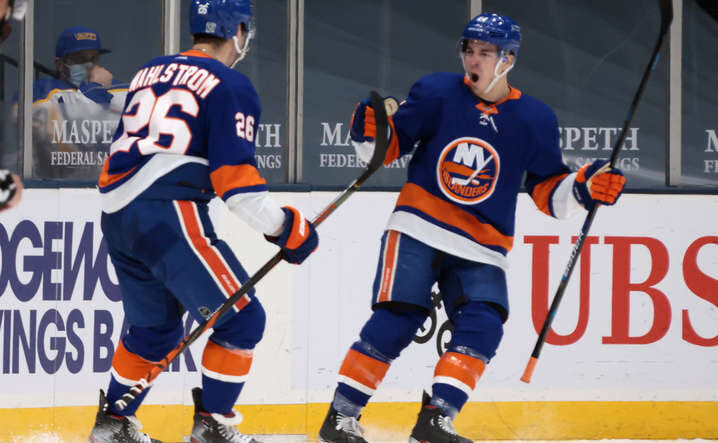 The question hasnâ€™t been asked, and no itâ€™s not meant to be a pun. But over the last few weeks, the Islanders have started to see a massive improvement in a part of their game that has long been a crutch â€” the power play.

After last nightâ€™s win â€” which included J.G. Pageauâ€™s late third period game-winner â€”Â the Islesâ€™ man-advantage has scored on six of its last 14 attempts. Those numbers areÂ something Isles fans might have only dreamed about after watching how ineffective the team has been man up the last few seasons. But itâ€™s actually a real thing now.

So, is their power play now an advantage of sorts?

The outlying numbers would say yes. This recent nine-game stretch has the team converting at 42%. As of this morning, the Isles have shot all the way up to 12th, according to ESPN. Considering where the club was a few weeks prior â€” right before they were handed a mini break because of COVID â€” this is a big development.

Well it starts with getting rid of the fanciness in their execution. Both power play units relied so heavily now on making the perfect pass as opposed to just putting shots on net. Thereâ€™s definitely been a change in mentality on that front. The perfect example was Pageauâ€™s tally against Buffalo.

Quick puck movement leads to a Oliver Wahlstrom one-timer from the top of the circle which leads to a rebound which Pageau is in the right spot.

“When things arenâ€™t going well on the power play, thatâ€™s the first thing you can look at is trying to attack more, trying to get pucks on net,” d-man Ryan Pulock said a few weeks ago. “Thatâ€™s where a lot of goals happen, boxing out around the net and someone puts it home.”

Well, Pulockâ€™s words have rung true. His unit and the second one too areÂ getting more prime chances and seeing more shots get through to the net. That comes from being confident with the zone entries â€” another outstanding bugaboo the Isles have dealt with â€” and being less methodical. Additionally, the placement of Wahlstrom and Noah Dobson have brought another element of deception to how the opposition has to defend.

The Isles bore witness to just how crucial an above-average power play can be when they lost to the Lightning in the Conference finals. Doing what theyâ€™ve done recently can prove to benefit them immensely not just for the rest of the regular season but the postseason as well.

Everyoneâ€™s waited long enough for the Islanders to have an effective power play. And now it seems that they have one and might finally just be an advantage.

Mathew Barzal didnâ€™t get a point last night, his fourth straight game without one, but his effort on Anders Leeâ€™s goal showed again how much more determined he is as a player this year.

His effort to steal the puck and help set up the goal was tremendous.

Anders Lee gets the goal, but what a damn shift from Mathew Barzal pic.twitter.com/g8gMadOMoP

Some might get mad when the Islanders get outshot, but it doesnâ€™t seem to bother them at all.

As the incomparable Eric Hornick said, the Isles have the most wins (56) in the NHL when being outshot since Barry Trotz took over.

We always talk about the team willing to risk offense for defense, but that stat tells you they win in some of the most interesting ways possible.