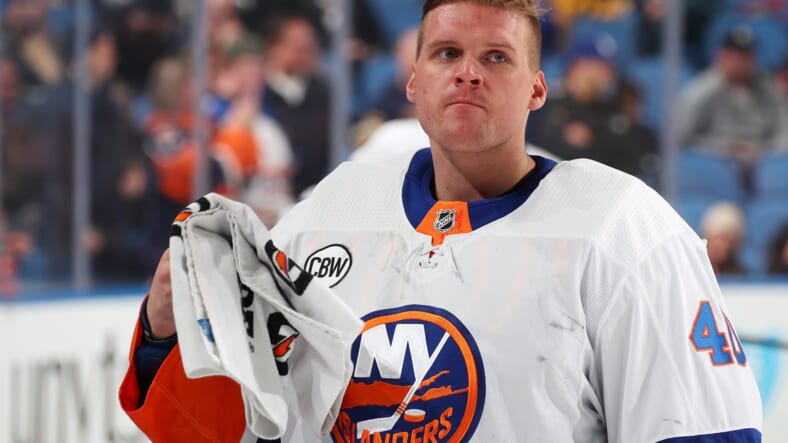 It’s been two years since Robin Lehner has donned an Islanders sweater, but how the relationship ended between him and the organization is still a highly debated topic.

Lehner, 30, was a part of the 2018-19 Isles squad that shocked the league and made it to the second round of playoffs, only to bow out to the Carolina Hurricanes.

That season marked a career revival for Lehner personally after he admitted in training camp that he had been dealing with mental health problems and alcoholism in the years prior. The Swedish native went on to be one-half of the duo that won the William Jennings Trophy with Thomas Greiss. He was also named a Vezina Trophy finalist and the winner of the Bill Masterton Memorial Trophy, the award handed out annually to the NHL player who best exemplifies the qualities of perseverance, sportsmanship, and dedication to hockey.

The feeling after that year was Lehner was going to be on the Island for the long haul. When the Islanders decided not to sign him — after he expressed his desire to come back — caught many fans by surprise. Lehner had become a fan-favorite in his short time with the organization and his performance was one the best in the league and the Isles had in goal in years.

Instead, the team decided to bring Semyon Varlamov into the fold. The move, which was raised eyebrows back then, has turned into a rousing success. Varlamov has helped backstop the Islanders to two consecutive third round appearances.

Lehner’s departure though has remained a mystery. The full story about what actually went down between him and the Isles has never been fully revealed. Until now.

The current Vegas Golden Knight was on the Cam and Strick Podcast yesterday where he discussed exactly where things went south before and during negotiations which eventually led him to sign elsewhere.

“The intention was to get things done at our end of the year meeting,” he said. “We talked and I was going to be a priority to get something done quickly. That didn’t happen. “We had Anders Lee and a few other players that were signing deals that year. We kept taking time and went the NHL Awards, and they said everything was going to be fine. We just kept waiting for an offer and then they wanted us to give them a number.”

Lehner revealed he was looking for more money and stability, to which the Isles only offered him a two-year deal worth $9M. This didn’t sit well with him as he believed he was worth more because of his numbers that season and his solid years before then.

“Obviously I wanted term and I thought I was worth more than $5M,” he added.
That money Lehner wanted was given to Varlamov. But there was an added caveat. Lehner mentioned the Isles were in pursuit of Artermi Panarin that free agency and the belief was that Varlamov and he would be brought in as a package deal with the two having the same agent.
That strategy didn’t fully work with Panarin ending up signing a long-term deal with the rival Rangers.Â Lehner on the other hand would eventually strike with the Chicago Blackhawks for $5M for one season. He would only spend a few months there before being dealt to Vegas, where he is now the number one in net after being awarded a five-year contract last summer and the recent trade of Marc-Andre Fleury.
Hearing what happened to Lehner provides a lot of clarity to a small, but interesting chapter for the Islanders. He remains one of the greatest one-year wonders in the history of the franchise. Both he and the organization have gone on to have a ton more success even after things didn’t end on the note everyone had hoped for.