Examining the affect of Nick Leddy possibly leaving the Islanders 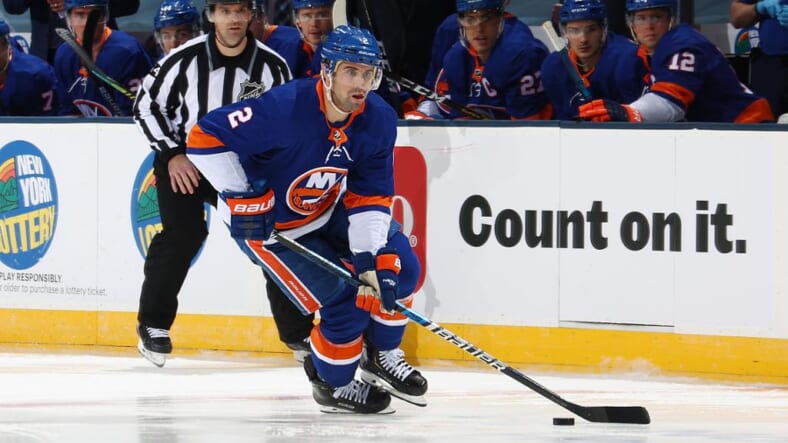 For the Islanders and their fans, all eyes are pointing to this weekend. Saturday marks when every NHL team must submit their list of protected players for the Seattle expansion draft. There’s a couple of names that have been the chatter the past few weeks in regards to whom the Isles might leave exposed, Nick Leddy among them.

Then came the development yesterday which provided even more clarity about where the 30-year-old d-man stands with the organization. The Athletic’s Arthur Staple reported that Leddy is indeed being shopped by the Islanders with the hopes the team doesn’t have to leave him unprotected and lose him to Seattle for nothing.

Leddy has one season remaining on his seven-year, $38.5M deal he signed with the organization back in 2015.

Hearing Leddy is on the block isn’t surprising based on the tumultuous cap situation facing the Islanders — they very little money to spend and still have to pay Adam Pelech, Anthony Beauvillier and Ilya Sorokin — but the thought of him leaving is still a tough one. Leddy has been an integral part of the Islanders for over the last seven seasons.

When he and Johnny Boychuk were acquired within mere hours of each other before the start of the 2014-15 campaign, they immediately changed the entire outlook of the organization. The Isles made the postseason in back-to-back years with Leddy being part of the top defensive pairing. Over the past few years, he has still maintained his status as a reliable presence, but Leddy has seen his role change somewhat under head coach Barry Trotz. Because of the ultra-defensive system Trotz employs, the d-man’s offensive mindset has had to take a backseat. The emergence of Pelech, Ryan Pulock and Boychuk being forced to retire due to an eye injury have all been a factor why.

Nick Leddy, reportedly on the trade block, has not been a strong playdriver at all in recent years despite strong offensive zone playmaking and prolific zone entries. #Isles pic.twitter.com/XjWJmSLqso

Now while it’s not a given Leddy is no longer in an Islander by next Wednesday, starting to look at life without him is definitely worth thinking about.

For starters, the Isles would lose arguably their most important offensive d-man. All due respect to Pulock — who is a solid attacker from the blueline in his own right — Leddy has been the team’s go-to guy from the backend for years. He’s been a Trotz favorite since he took over.

Leddy had three-plus years of 40 points or more until stumbling in 2018-19 and has been the team’s top power play quarterback for several seasons now. His speed and ability to enter the zone also have made him extremely valuable to the Islanders’ success as well.

Filling Leddy’s slot in the top-four won’t be an easy task either. As Staple said, prospects Samuel Bolduc and Robin Salo are likely options, but they might still need more seasoning.

Beyond them, could Noah Dobson be ready for another promotion? He was given the vote of confidence last year when the organization had to depart with RFA Devon Toews, whom they traded to Colorado. This year was sound one for Dobson playing third-pair with veteran Andy Greene.

But remember this, the Isles drafted Dobson in 2018 as high as they did with the thinking he would be on a top-four defender for the future.

On the flip side, Leddy being moved or taken by Seattle would allow g.m. Lou Lamoriello some flexibility to keep the core together that has now gotten to the third round in back-to-back years. The Isles are very close to being a Stanley Cup winner, and there are a few important pieces that need to be kept here for them to finally get over the hump.

Knowing for that to happen at the expense of Leddy might not soften the blow, but sometimes you have to sacrifice in terms of the bigger picture.

Changes are coming soon for the Islanders and they could start with Nick Leddy being at the forefront. Him possibly leaving will have an affect in a number of ways.