Don’t let anyone fool you, the Islanders were the Lightning’s toughest challenge in repeating as champs 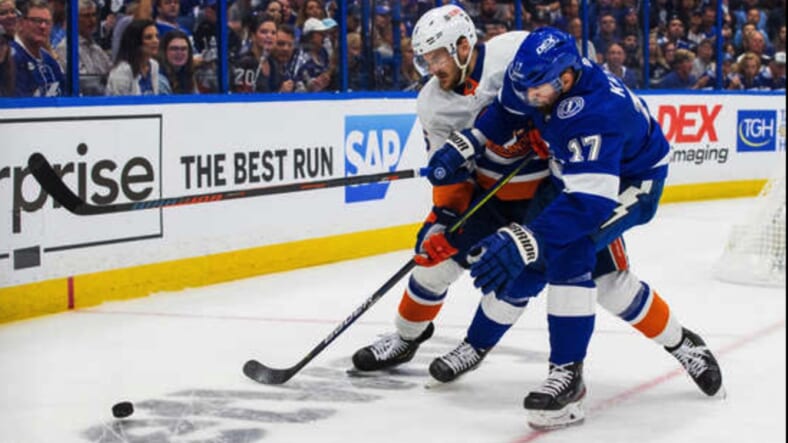 If you were watching the last moments of the NHL on NBC’s broadcast of the Stanley Cup Finals, you would have heard something that would make you shake your head. And if you’re an Islanders fan, it probably made you laugh.

Keith Jones, an analyst that blue and orange supporters aren’t enamored with going back to his days with the Philadelphia Flyers, made a remark that the Florida Panthers were the Tampa Bay Lightning’s toughest challenge on their run this postseason to repeating as champions.

Not the Montreal Canadiens, whom they just defeated in the Finals. Nor the Carolina Hurricanes, a team that could be considered a lighter version of them Tampa themselves.

Jones pointed out because there were scrums after almost every stoppage of play, how physical the series was from the start and the high-scoring games, that Tampa had to work extra hard advance past the first round.

Maybe this was just ignorance or jealousy on Jones’ part, but someone should have reminded him it took Lightning just five games to dispose of the Panthers. And look, that is not to say Florida wasn’t a tough opponent for the Bolts — they showed they’re no joke — but it’s not even in the same conversation to the war the Isles put Tampa through in their semifinal matchup.

Lets look at the facts too. It was a nasty, intense, and brutal for all the players involved. Five of those seven matchups were all decided by a single goal. Only Game 2 and 5 was the goal differential different. But remember this: even in that Game 2 win for Tampa, it was a tie game late in the second period before Ondrej Palat’s “controversial” goal flipped the game in the Lightning’s favor.

To further the point, the last game between the two clubs ended in a 1-0 score on a shorthanded goal. A SHORTHANDED GOAL. That’s how extremely close the Islanders pushed the Lightning to the brink of elimination.

Oh might us remind everyone (especially Jones) too that the Bolts had to overcome an Isles’ club who was without their captain Anders Lee, a compromised J.G. Pageau — he played the series with a broken thumb — and a truly game Semyon Varlamov.

“When you win a championship or end up getting to play for one, you want to say you went through the best,” Lightning coach Jon Cooper said after Game 7 a few weeks ago. ”

And I can honestly say here…the Islanders are as good a team as we’ve played in two years. And last year in Game 5, it goes to overtime, Game 6 goes to overtime. Nothing was easy. Not even the 8-0 in Game 5. It was unbelievably difficult. And the proud team they are, to come push on as they did at the end…that’s as close as two teams can be.”

If the coach of the winning squad heaps praise like that for his opponent, that’s got to mean something. Islanders fans can take some solace in knowing that they were the true final obstacle that Tampa needed to get through to win it all.

Some can say that the shoe is now on the other foot with the Lightning being in the way of the Islanders winning it all. Who knows, maybe the two teams make it a three-peat next year and face each other again. Wouldn’t that be a treat?

It’s not impossible either, despite the fact both organizations are going to see changes due to being hammered by the salary cap. But it goes without saying in these playoffs, the Islanders were the ultimate challenge for the Bolts.

They were the team that nearly ended their bid to repeat and made them work the hardest.