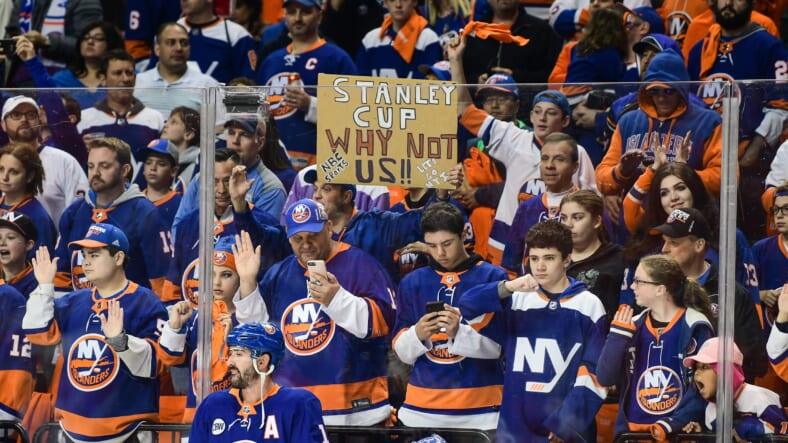 Apr 26, 2019; Brooklyn, NY, USA; Islanders fans holding a sign during warmups during a game between the New York Islanders and Carolina Hurricanes in game one of the second round of the 2019 Stanley Cup Playoffs at Barclays Center. Mandatory Credit: Catalina Fragoso-USA TODAY Sports

Earlier this week, Isles g.m. Lou Lamoriello on a conference call with two news outlets revealed that if the NHL season were to resume sometime soon, the two home final home games scheduled for Barclays Center would no longer take place. Instead, they would be moved to the Nassau Coliseum.

With that, it marked the end of the franchise’s five-year run of playing games in Brooklyn.

But, to be blunt, the end of the Isles and their rocky relationship with Brooklyn had come well before Lamoriello spoke Monday. It actually was the moment the story broke that the Isles’ ownership group — Scott Malkin and Jon Ledecky — were already exploring their options about a possible new home at Belmont Park back in July 2016.

The Islanders didn’t win the bid for Belmont that day — that would come several months later in December — but they made their intentions clear: they wanted out. They had wanted out for a long time before that too.

Nearly a decade ago, former Isles owner, the late Charles Wang, had exhausted every possible avenue to help build a brand new facility for the franchise in Nassau County. He schmoozed with Nassau County politicians and did everything in his fiber to get this organization and its fans the arena they deserved. Wang tried with the Lighthouse Project — which he would have paid for on his own — and that failed. Then came the Referendum, which was a plan to build a new arena from taxpayers’ money. That failed miserably.

It left him no other choice: Brooklyn. And that’s what Wang decided.

On October 24, 2012, Wang, former Barclays Center majority owner Bruce Ratner, former New York City mayor Michael Bloomberg, and the team held a press conference outside Barclays Center and announced that the team would be starting play full-time there at the conclusion of the 2014-15 season. The lease was “ironclad” for the next 25 years, and hence gave the notion that the Islanders were saved.

Three years passed by and the Isles were now a city team. As weird as that sounds, the fans were now taking the trains and subways to the games, and so were the players. The building was dark and dreary, but the retired numbers hung and so did a specific banner that showed all the division and conference titles the franchise won in its history.

The Isles were on the upswing too and their fans were feeling the same. They had just come off their best season since 2001-02 and had lost a physical, hard-fought seven-game series to the Washington Capitals in the opening round of the playoffs. Some of that good feeling was immediately tested when they released a new third jersey. A black and white concoction that literally showed no affiliation to the franchise whatsoever. The new threads didn’t receive much positive feedback and was the first hint that this partnership wasn’t going to be all sunshine and rainbows.

Strike two was just as bad.

During one of the first preseason games in the building, a new goal horn blasted after the Islanders scored in the third period. Fans were furious and it forced Brett Yormark, CEO of Brooklyn Sports and Entertainment at the time, to go on the radio the next day and tell the fans they were reversing their decision, bringing back the old goal horn the fans were used to.

Things didn’t progress from there. Seats with the obstructed views, Yormark telling fans who can’t see at one end to download an app to watch the game, poor game presentation, and this unreal incident all just made for a worse look.

Mind you, this all took place the first three months since the team had arrived. After that things began to settle down and the Isles made the playoffs again. Barclays got its first chance to prove it could be a home-ice advantage, and it didn’t fail per se, but it was obviously different. The atmosphere, crowd, and overall advantage the building brought didn’t stack up to the Coliseum.

Following that first year with a postseason appearance, the building and team just never meshed well. The bad ice was never improved, the arena and its staff never truly embraced the fans and their passion, and even the former captain, John Tavares, nearly got seriously hurt because of poor playing conditions.

With the Isles still battling for a playoff spot with seven games left in the 2016-17 season, Tavares suffered a hamstring injury in a win over the New Jersey Devils due to a rut in the ice.

â€œYou see a guyâ€™s heel dig in like that, it doesnâ€™t happen other places,â€ forward Cal Clutterbuck said after the game that night. â€œItâ€™s something that doesnâ€™t get addressed â€¦Â It had been a little better the last few games, but not [Friday] night.â€

Again, it was just one of those aspects of the team’s stint at Barclays that was an eyesore.

There were some good times though. Tavares and Thomas Hickey’s OT game-winners in the 2016 playoffs. The dramatic 7-6 comeback against the Red Wings in 2018. The team’s domination of the Rangers and Western Conference when they played. Their two-year run of barely losing in regulation from last year into this year. And the franchise’s first playoff series win in 23 years.

A lot of people will look to this era of Islander hockey and sigh, but it’s all a part of where the franchise is now.

The Belmont Arena will be here before you know it, and it will signify the new true home of the Islanders for generations to come.

Barclays Center could have been that. They saved the franchise from an unknown future. But they squandered a huge opportunity and didn’t get themselves any sympathy in the process.

The last Islander game in Brooklyn was supposed to be a Sunday evening four days from now against the Carolina Hurricanes. That won’t be the case. The last one will be remembered not just as a 6-2 throttling by the Montreal Canadiens but as the ending to a missed chance for possibly something special.