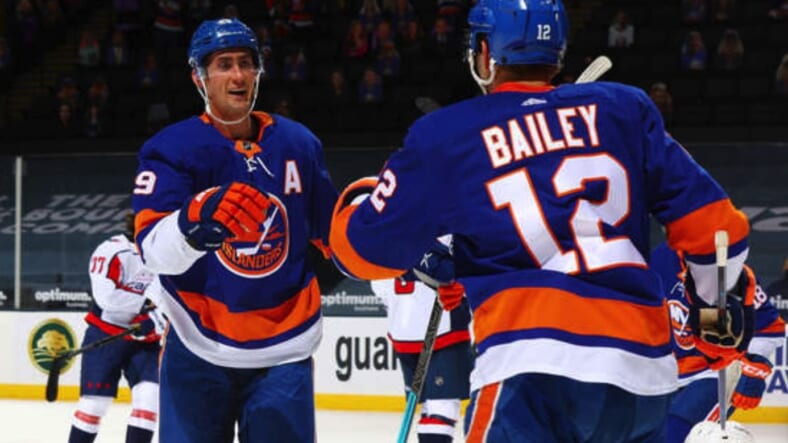 If you’ve watched the Islanders from their first few weeks of the season and what has transpired since up until the present day, you would say it’s been a tale of two seasons.

The Warroad, MN native struggled mightily out of the gate, recording just three points in the first nine games of the season. He looked out of sync at both ends of the ice, as did his linemates who made up the second line. It felt as if Nelson, the Isles’ most consistent forward the previous two seasons, needed a bit of a reset to get himself going. Then came the pause in the team’s season the first week of February, as a result of the Buffalo Sabres dealing with a COVID-19 outbreak; the Islanders were supposed to play Buffalo twice that week.

That break, when it’s all said and done, might have been what turned the Isles’ season around. Furthermore, it might have also been a blessing in disguise for Nelson. The first game back against Pittsburgh, he recorded an assist and had his strongest performance of the season playing on a newly-formed line with Jordan Eberle and Michael Dal Colle.

Following that game, Nelson has recorded 18 points in 28 games. In years past, those kinds of numbers might seem like he’s falling short of expectations because Nelson was depended on to produce at a higher rate. But for how the Isles are currently constructed — now become a well-balanced attack, even with the absence of captain Anders Lee — those a pretty solid numbers.

Nelson’s 13 goals have him in a three-way tie for the team lead with Eberle and Mathew Barzal. Six of those redlights too have come on the power play, a department where both Nelson and the Islanders have made huge strides. He also still has a shot at a third consecutive 20-goal season with 18 games left to play.

What’s also been noticeable has been Nelson’s defensive improvement, perfectly exhibited by his tremendous backcheck to stop a breakaway for Philadelphia’s Joel Farabee last game.

Not even four years ago so we see this kind of effort from Brock Nelson. Excellent back check. #Isles pic.twitter.com/kdtwFIrP5T

“I have a lot of trust in Nellieâ€™s game over the course of time that Iâ€™ve been here,” head coach Barry Trotz noted before the Islanders’ most recent shootout victory Saturday over the Flyers. “And when his line with him and Bails have been together and Beau is over there, that line has given us really good minutes. And when they donâ€™t, itâ€™s noticeable. Itâ€™s noticeable to our group. Itâ€™s not noticeable to the production and success of the team.”

The Islanders have given Nelson the “A” with Lee now out, and he’s run with it so far. They are going to need his leadership and sound play as they continue to be in a dogfight for the top spot in the MassMutual East Division.

A few weeks into this truncated season, it looked as if Nelson was lost and a step behind. That seems like an afterthought now. He’s recovered quite well.

And with the postseason on the horizon, that is huge for not just him but for where the Isles hope they will be going.

Hard to believe Mathew Barzal hadn’t been named the league’s “First Star of The Week” in his four-year career up until he received the honor yesterday. Barzal has had weeks and runs just like he did last week — seven points in three games, including a five-point explosion against the Capitals last Thursday — but somehow never got top billing.

This will probably be the first of many top star of the week honors Barzal will attain during his career.

Will be great to see one of the OGs back at the Coliseum starting Tuesday. Organist Paul Cartier will make his long-anticipated return after his battle with COVID-19 months ago.