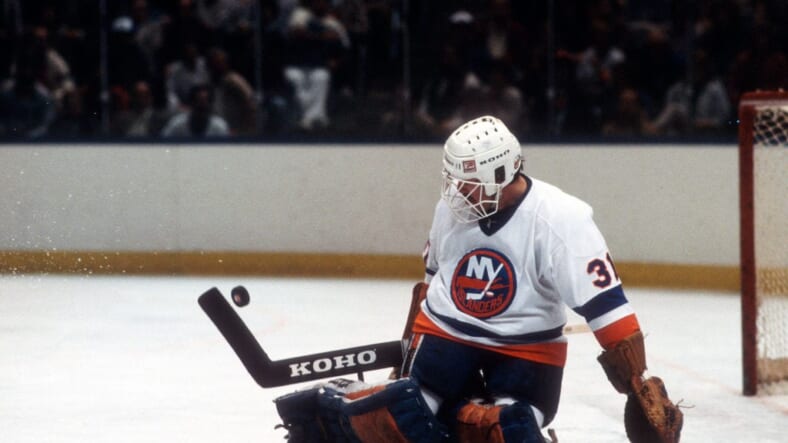 UNIONDALE, NY – CIRCA 1982: Goaltender Billy Smith #31 of the New York Islanders defends his goal against the Vancouver Canucks during an NHL Stanley Cup Playoff game circa 1982 at the Nassau Veterans Memorial Coliseum in Uniondale, New York. Smith played for the Islanders from 1972-89. (Photo by Focus on Sport/Getty Images)

The list of clutch performances during the New York Islanders‘ run to four straight Stanley Cup titles is endless.

One of them, which doesn’t isn’t talked about enough, is Hall of Fame goaltender Billy Smith’s memorable showing in game one of the 1983 Stanley Cup Final yesterday 37 years ago.

That evening, “Battlin’ Billy” shut down an upstart Edmonton Oilers squad chock full of future Hall of Famers. The then-33-year-old veteran made 35 saves en route to a 2-0 shutout win.

Smith’s masterpiece truly marked what became one of the last hurrahs — the other Ken Morrow’s OT goal the following spring to send the Islanders to the second round — of the dynasty the Isles had built in the early ’80s.

Originally drafted by the Los Angeles Kings, the Islanders were fortunate enough that Smith was available for the 1972 expansion draft. It took some time for Perth, ON native to find his footing on Long Island, but once he did, Smith became one of the best goaltenders in the league. He posted 20 or more wins four times in his first seven years with the Isles. Despite that success, Smith and the Islanders couldn’t get over the hump in the postseason.

They finally broke through in 1980, defeating the Philadelphia Flyers in six games on Bob Nystrom’s overtime game-winner. In that playoff run, Smith went an incredible 15-4 and thus introduced himself as one of the clutches goalies in hockey history. From that spring, the Islanders were off to the races. They would go on to win three more Stanley Cups straight as Smith continued to build his legacy.

Note: Also in that 1981-82 campaign, he received the only All-Star nod of his career. Smith also won the Vezina Trophy.

Heading into the postseason in ’83, Smith was coming off a so-so year — 18-14-7 — but was still one half of the duo that was awarded the William M. Jennings Trophy with Roland Melanson. Smith turned it on once the playoffs began.

Surrendering just two losses in the first two rounds, Smith and his teammates ran right through the Washington Capitals and New York Rangers. In the Wales Conference Finals against the Bruins, the series saw Smith give up a number of goals, but also receive even more support from the Isles’ star-studded forward group.

The Islanders would defeat the Bruins in six games, setting up a showdown with Wayne Gretzky and the Oilers.

A lot of critics expected the Oilers to dethrone the two-time defending champs, but no one told Smith. And low and behold in that pivotal game one, he stole the show.

Smith’s warrior performance left his teammates and his legendary coach in awe both back then and even all these years later.

“I’ve never seen a goalie play as well as he did,” said defenseman Ken Morrow a few years ago. “How Smitty managed to pull a shutout out of that game with all the scoring chances they had. It was one for the ages!”

“It was an extraordinary performance by Smitty,” the late Al Arbour said after the game. “We hung tough, scratched, clawed and did everything we could to keep it out. When we didn’t, Smitty was there.”

The Islanders used that game one victory as fuel on their way to sweeping Edmonton and securing the fourth consecutive Stanley Cup in four years, the last of which the franchise has won since.

For his excellent spring, the veteran Smith won the Conn Smythe Trophy — the award given to the most valuable player in the Stanley Cup Playoffs.

The winning of the Conn Smythe was the exclamation point on Smith’s historic career. That performance in game one though was one for the ages and still lives in Islanders playoff lore.