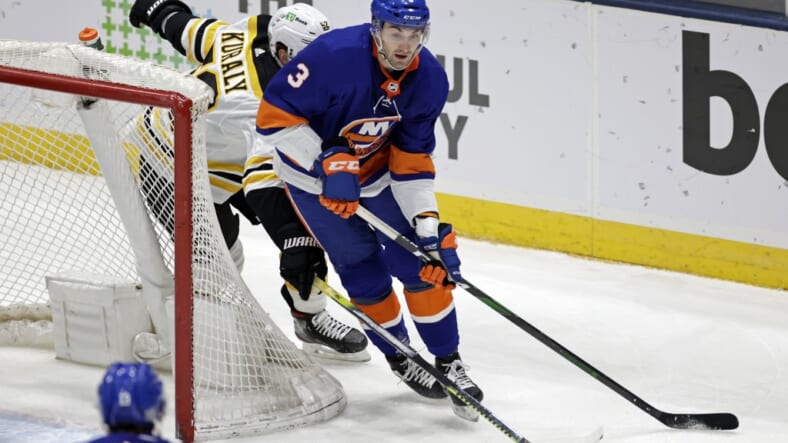 When you think of the Islandersâ€™ blue line and the word offense, youâ€™re most likely to stop at two specific names: Ryan Pulock and Nick Leddy. Those two are far and away the clubâ€™s two best offensive d-men. Their point totals through 25 games prove it â€” Leddy with 16, Pulock with ten.

But as the season has progressed, another defender has quietly shown his nack for getting in on the attack, Adam Pelech.

The 26-year-old Pelech has seven points this year, fourth-most for an Isles D. That might not sound like much, but it shows he has tried to contribute more with the puck on his tape. And there have been instances where that mindset has really come to the forefront.

Pelechâ€™s underestimated offensive skill set has been lauded by head coach Barry Trotz for awhile now. During the Islesâ€™ long postseason in the bubble, Trotz talked about Pelech hitting his stride in that department. The most common used term though is â€œdeceptionâ€. Obviously itâ€™s carried over to this season as Pelech has already totaled 40 shots this season and is a +6.

â€œI think youâ€™re starting to see that side of his game a bit more,â€ Trotz noted a few weeks ago. â€œYou see him getting up in the rush more, heâ€™s more comfortable with that.â€

Now while Pelechâ€™s offensive outlook pales in comparison to how heâ€™s viewed as a defender â€” Pelech is considered one of top defensive d-men in the NHL â€” thereâ€™s no denying the increase in production adds another layer to what makes him such a valuable piece to the Islanders. As said before, the Isles depend on 2 and 6 to be the main drivers offensively on the back end. Throw Noah Dobson in there now too if youâ€™d like for what heâ€™s added, 11 points in 25 games.

But Pelech? Itâ€™s almost an added bonus because heâ€™s relied upon so much to be a shutout number-one D.

No longer having Johnny Boychuk and Devon Toews (both known for their offensive contributions) on the blue line also has to be taken into account with why weâ€™re seeing a bit more attack from No. 3.

Pelech has come a long way from two years ago where his spot on the Islesâ€™ d-core was in question. Flexing his muscles offensively only strengthens how much of his game has evolved.

And as the Islanders continue to win, and the more he shows that side of him, the even scarier they will be moving forward.

Weâ€™ve written about how terrific Anders Lee has been for the Islanders all season long. But one star might stand above the rest.

AccordingÂ to NHL.comâ€™s Pete Jensen, the Islesâ€™ captain is the only player in the league this season with ten or more goals, three or more shots on goal per game and one-and-a-half hits per game.

Currently, Lee has three goals in his last four games and is on pace to score over 35 goals by seasonâ€™s end.

Mathew Barzalâ€™s otherworldly goal over the weekend had everyone trying to figure out how to describe what they had witnessed. Even himself had no words for what he was able to pull off.