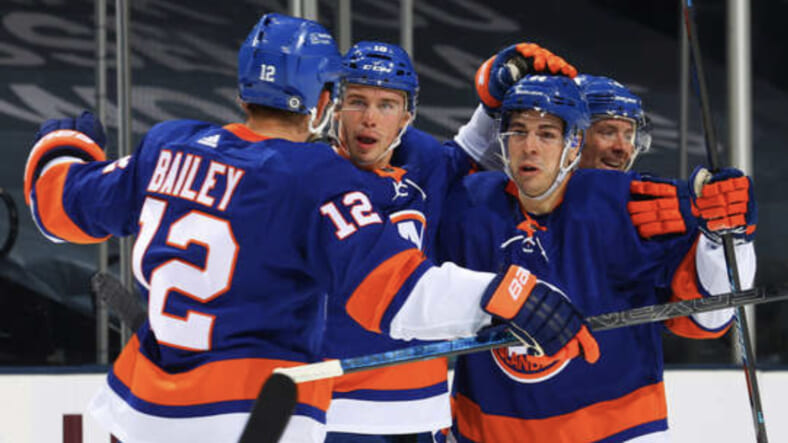 Once in a hockey season, thereâ€™s always a game from somebody that makes you go â€œWowâ€. That was Anthony Beauvillierâ€™s four-point game last night in the Islandersâ€™ 6-1 smashing of the New York Rangers. It was the kind of showing that Isles fans have come to know from the one they call Beau whenever he sees the Blueshirts on the opposite side.

Beauvillier now has 20 points in 19 games against the Rangers in his career and two four-point nights on his ledger, the other a couple seasons back in a 7-4 Isles win in November 2018. More importantly, Beauvillier had his best game of the season when his team needed it the most, as the Islandersâ€™ offense had gone cold the previous three games on their road trip. The newly-formed line of he, J.G. Pageau and the returning Josh Bailey caused mayhem from the drop of the puck. The three combined for nine points as a unit.

“Everything I touched seemed to go in,” Beauvillier said after the victory. “Those kind of nights, you just try to appreciate it and go from there. I thought our line and the whole group was really going well tonight. It was one of those nights where you just try and take advantage of it and appreciate it.”

Have a night Anthony Beauvillier and Josh Bailey. This was filth. pic.twitter.com/PlBCI3Fkrk

The Islanders and their fans had been waiting for a night like the one Beauvillier had a majority of this season. This season hasnâ€™t been great for #18 after he was tremendous in the bubble last summer. Expectations had risen that Beauvillier was going to breakout as a star this year, but those quickly dissipated when he got off to a slow start which compounded with him getting hurt in the fifth game at New Jersey leading to him missing ten games. Beauvillier has struggled to regain that consistency, but now with ten games left in this truncated campaign, maybe his dismantling of the Rangers lights the fire that launches him forward the rest of the season, meaning the return of the playoff-version of him.

In the past after Beauvillier has a strong game, he usually follows it up with more solid play and production. The Isles next three games against the Caps could be what decides the top spot in the East division, so thereâ€™s no better time for Beauvillier to really bust loose. And with the playoffs on the horizon, momentum heading in for any player can be crucial. We saw it first hand when Beau and the Isles returned to play before entering the bubble.

Beauvillier was a monster against the Rangers. It could be the turning point that now flips the switch for him the rest of the season and even further.

Itâ€™s happened before. Hopefully, it does again.

Matt Martin made it crystal clear that if you take a run at him, expect him to come right back and do the same. Last night, Jacob Trouba learned that lesson first hand after Martin throttled him and knocked him out of the game not even 20 seconds after Trouba went after him early on in the first period.

If not for the shellacking the Isles laid on the Rangers, what Adam Pelech did to Kevin Rooney would have been mentioned way more. Pelech schooled the Rangersâ€™ forward in the defensive zone which left the Coliseum crowd oohing and ahhing.

Pelech didnâ€™t record a point in the victory, but he sure as heck left his mark on a terrific game from he and his entire squad.