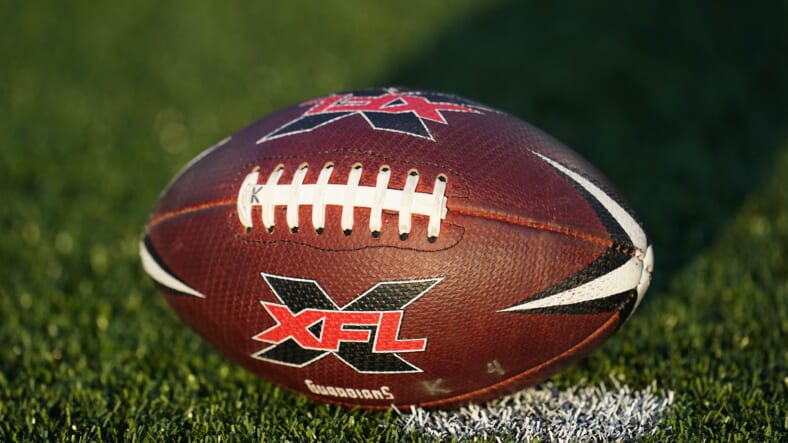 ARLINGTON, TX – MARCH 7: A general view of the New York Guardians official game ball during the XFL game against the Dallas Renegades at Globe Life Park on March 7, 2020 in Arlington, Texas. (Photo by Cooper Neill/XFL via Getty Images)

Despite initial plans to return for a second season in 2021, the XFL’s second attempt at spring football has suspended operations.

It comes under completely different circumstances, but the second attempt at XFL football appears to be destined for the same fate as the first.

The league has reportedly suspended operations and has laid off almost the entirety of its team and league employees. XFL officials informed employees in a conference call hosted by Chief Operating Officer Jeffrey Pollack.

This crushing blow comes just over a month after the XFL halted regular season games in the wake of the COVID-19 pandemic. The league canceled the remainder of the season (which had played five of its ten regular season games and was set for a four-team postseason) shortly after but was committed to returning in 2021. Players from the XFL’s eight teams were allowed to sign with NFL and CFL squads shortly after the cancellation.

Thus likely ends the era of the rebooted XFL, nearly two decades after another league under the same moniker lasted a single (full) season in 2001. This new XFL was similar in name only, eschewing the campy kayfabe techniques inspired by its World Wrestling Federation (now World Wrestling Entertainment) overseers. The new league nonetheless introduced several in-game innovations focused on pace of play and a sense of fun. For example, a tiered point-after-touchdown system allowed teams to score as many as nine points on offensive possessions. The league also showcased a shootout-style overtime system that never came to fruition (all games ended in regulation).

Oliver Luck served as the commissioner of the new XFL, whose resurrection was overseen by Vince McMahon. This marks the second year in a row that a spring football league has met an early demise, though the XFL was hardly at fault. The Alliance of American Football shutdown in April 2019 and later filed for bankruptcy.

On a local level, the New York Guardians likely end their brief history with a 3-2 record, good for a three-way tie for first in the XFL’s East division. The team played their home games at MetLife Stadium. New York won each of their two games in East Rutherford, the latter being a 17-14 triumph over the Los Angeles Wildcats on February 29. Los Angeles and New York were the only were two markets retained from the XFL’s original version. Back then, the New York/New Jersey Hitmen went 4-6 and played their home games at Giants Stadium.

Several Guardians have already found new homes in the NFL. Cornerback Dravon Askew-Henry was added by the Guardians’ MetLife Stadium co-tenants (the New York Giants), while offensive lineman Jarron Jones and defensive lineman Cavon Walker were each signed by the Pittsburgh Steelers. Walker led the XFL in sacks with 4.5.