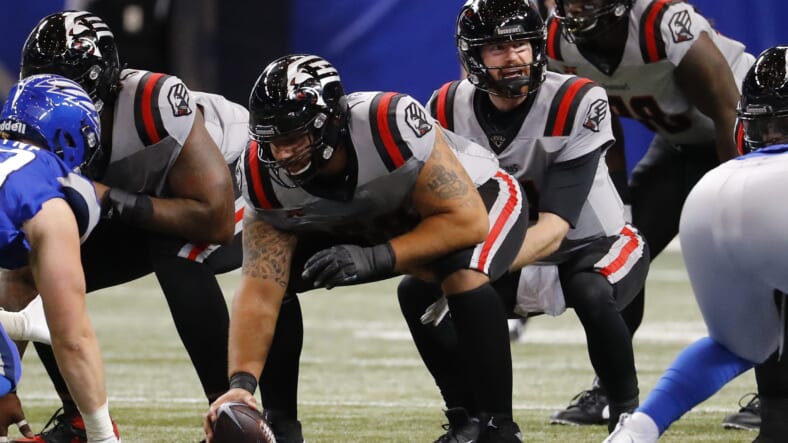 Feb 23, 2020; St. Louis, Missouri, USA; NY Guardians quarterback Matt McGloin (14) calls the play from under center during the first half of an XFL game against the St. Louis Battlehawks at The Dome at America’s Center. Mandatory Credit: Billy Hurst-USA TODAY Sports

The XFL was among the final sports leagues to stop business in the wake of the Coronavirus pandemic, stalling the season of the New York Guardians.

The XFL announced on Thursday that the league will stop its regular-season schedule. While no specifics were given, the news likely comes as a result of the Coronavirus pandemic that has led to the cancellation or postponement of several other professional leagues’ proceedings, as well as numerous college basketball tournaments.

“Currently, the XFL will not be playing its regular-season games,” the statement reads. “However, all players will be paid their base pay and benefits for the 2020 regular season. All XFL ticket holders will be issued refunds or credit toward future games. The XFL is committed to playing a full season in 2021 and future years.”

The statement’s specification of regular-season game cancellations hints that they will attempt to stage the playoffs. Four of the league’s eight teams were set to be invited to the postseason, with the top two from each division getting the invitations.

The XFL was a rebooted spring football league, borrowing its name from a failed 2001 version made in conjunction with World Wrestling Entertainment and NBC. WWE chairman Vince McMahon announced the arrival in 2018, with eight new teams taking the field last February. The league deemphasized the gimmicks that defined the 2001 attempt but featured several innovations on the field. Among them were tiered extra points that featured plays worth one, two, or three points respective set up from the two, five, or ten-yard lines.

Thus potentially ends the season of the local New York Guardians. New York was one of two markets retained from the original version, the other being Los Angeles. The Guardians posted a 3-2 record, having won two games in a row after a tough start. That record was good enough to place them in a first-place tie with the DC Defenders and St. Louis BattleHawks. Their last game was a 30-12 victory over the Dallas Renegades last weekend in Arlington.

Several members of the Guardians took to social media to express their shock about the developments.

“This all happened too fast,” defensive lineman Joey Mbu said. “And the league didnâ€™t even fold.”

Others, like long snapper Scott Daly, expressed their gratitude for their time in black.

“Thank you…for the opportunity to play the game that I love! Grateful for the new friendships, memories and chance to keep the dream alive! The journey continues!”

New York was set to welcome in the undefeated Houston Roughnecks to MetLife Stadium on Saturday afternoon. As mentioned in the statement, refunds will be available to ticket holders.