The WNBA and NFL Drafts Maximized Joy in Minimized Surroundings 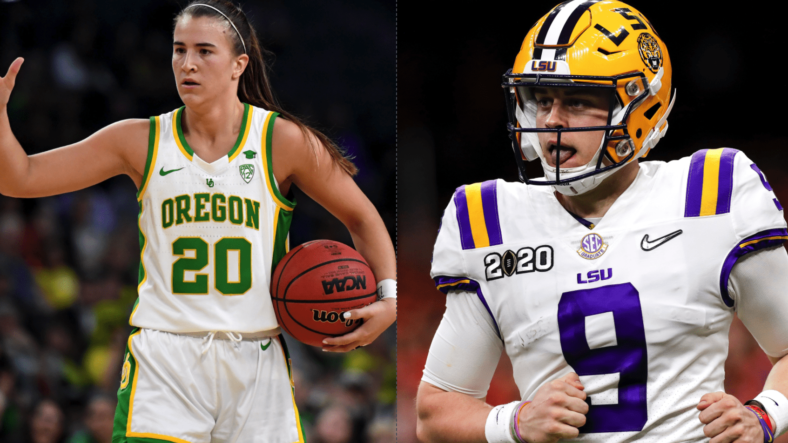 As talks about live sports’ return intensify yet stall, the WNBA and NFL each came through by keeping the essential draft day feeling: joy.

As we continue to work our way back up from this unprecedented crisis, America doesn’t need a distraction anymore. Granted, we’ve had a decent share of them. John Krasinski hosted a “virtual prom” for high school students whose spring festivities were canceled. Lady Gaga raised $35 million toward research and recovery efforts via an online concert. Only the most hollow of souls failed to shed a tear when Chris Pratt struck up the opening chords of “5000 Candles in the Wind” during a remote Parks and RecreationÂ reunion hosted by NBC on Thursday night.

But America needs a little more than a distraction at this point. We need new emotions to let us know there’s a light at the end of this tunnel, no matter how long it is. Emotions like joy, hope…those are the sustainable feelings that give us the power, the fuel to keep on fighting.

Sports are usually the best providers of those emotions. One of the best sources, the NCAA Basketball tournaments, was denied to us entirely. Spring is often a surplus through the respective postseasons of the NHL and NBA. Slowly but surely, leagues are trying to work their way back. While NASCAR is making a confirmed return to the asphalt (having provided a few weeks of distractions via virtual races on the iRacing platform), other leagues have gone through processes of one step forward, two steps back.

When it came to providing these lasing feelings, the WNBA and NFL had sterling opportunities to capitalize. Each league chose to carry on with its respective draft in a virtual setting. Much like heroes and heroines found within each organization, they came through in the clutch.

Draft night in each league was missing the usual pomp and circumstance when said hype was expected to reach a fever pitch. New York was due to host the WNBA Draft for the fourth consecutive season, just as the local Liberty were due to welcome in Oregon record-smasher Sabrina Ionescu in time for their Brooklyn arrival. The NFL was preparing to follow the Raiders, the Wolfpack, Ocean’s 11, and the Griswolds to Las Vegas for their own rookie introductions. Alas, the ongoing public health situation shut down nearly all nonessential businesses and recreational activities. As sports fans have learned the hard way, that included the draft proceedings.

Both the WNBA and NFL opted to press on. Much like we, the sports-loving public, they opted to carry on business through a digital platform. Visions of football prospects escorted by boat to a stage in the Fountains of Bellagio were instead substituted by the basements and studies of the commissioners. A walk down the orange carpet was replaced by a walk to the living room.

The party was toned down. But the joy was there to stay

Over the course of respective drafts’ four nights, dreams were realized. Hope and joy was provided. Many picks, from the top choices of Ionescu and LSU quarterback Joe Burrow all the way down the draft board to hoops’ third round and football’s day three, provide something to look forward to when this is all over. The date of their debuts remains in flux, but a hint at the light ahead was just what a grieving and aching country needed.

“When I called the draftees, that’s when I knew we had made the right decision,” WNBA commissioner Cathy Engelbert said hours before she called Ionescu’s name. I heard comments like ‘Thank you for making my dreams come true’, or ‘Iâ€™ve been preparing for this moment my whole life’ And just for the American public that tunes in…to hear that, to experience this, to see this diverse group of young athletes who had some of their dreams thwarted with the NCAA Tournament, to realize their dreams, it was all worth it to me when I was talking with them. During one of the calls, the family was cheering in the background. It was so cute. It really made me feel like we did the right thing here. We need to give these bright spots to the American public, and certainly, live sports is very much missed.”

Perhaps true to societal form, not everything was perfect. The latter portions of the already short WNBA Draft were mostly passed over for a Kobe Bryant tribute. Issue was taken with NFL Draft scouting reports and “meet the draftee” segments focusing on personal tragedy and hardship. While excessive, such narratives could help all of us right now. If these players could rise from the darkest of personal times…on the WNBA side, for example, Ionescu partook in a crucial Oregon game hours after giving a eulogy at the funeral of Bryant, her close friend and mentor…then we too can rise up from the personal challenges facing us now.

Clemson receiver Tee Higgins was one such player whose graphics raised eyebrows. After Higgins was named the first pick of last Friday’s second round, an ESPN graphic documenting his background noted that his mother Camillia “fought drug addiction for 16 years”.

Higgins took no issue with the graphic and was instead glad to see that his first NFL moment also the world to know his mother’s story of fighting and recovery.

“Iâ€™m proud of my mom for turning her life around for me and my sister!” the newly minted Cincinnati Bengal said in a post-draft tweet. “I have no problem with them showing the world that my mom is a true fighter.”

With the players relegated to literal friendly confines, the sense of joy was not only maintained but amplified. Draft day can often be a blur in the endless festivities. Draftees often end the evening with dozens, even hundreds, of text messages and emails from friends and family, unable to respond due to endless waves of interviews. Glimpses into NFL “war rooms” sound tempting, but routinely become a slideshow of team executives watching screens and engaging in one-sided or muted phone calls.

But as a result, the lasting joy and hope were seasoned with the aforementioned distracting levity with coaches and executives keeping their distance. Seconds after she got off the phone with the Chicago Sky, Ruthy Hebard paraded through her hometown of Fairbanks, Alaska to the soundtrack of her safely distanced neighbors. Bill Belichick was briefly “replaced” by his dog Nike. We finally discovered the whereabouts of Frozone’s “supersuit” in Mike Vrabel’s setup.

No longer were these calls and reunions postponed. The rookies’ first professional celebrants were none other than the people closest to them.

“Through a difficult time and unprecedented time of the corona being on lockdown, I think (the WNBA) made a great effort just to make it a great night,” Dallas Wings draftee Tyasha Harris added. “Even though it was difficult, I think we found peace and happiness throughout it all, and just made this a wonderful night for me and other draftees.”

The adjusted, confirmed return of NASCAR (as well as the tentative PGA Tour rearrival in July) notwithstanding, it’s unknown when we’ll see competitive, live sporting events again, at least on a regular basis. But if these drafts were the last gasps we’ll have until things return to normal, they provided a brilliant way to go out. The drafts took up four days in a bleak period. Their joy and good vibes, however, can push us further and brighten the light in our tunnels and maybe draw it a little closer.

Live sports, for the right reasons, have been declared nonessential businesses in this time of crisis. But the essential services they provided when granted a brief reprieve……you guessed it, the lasting joy and hope…can last us quite a while.