Penn State: The Season Is Already Over For The Nittany Lions 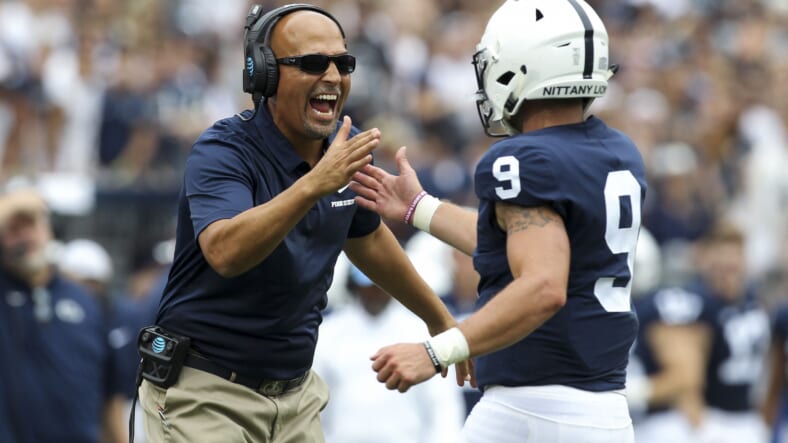 This isn’t what the more optimistic fans will want to hear, but the season is effectively over for Penn State. Not that there aren’t more games to play, but they just don’t mean the same thing that they meant before the Nittany Lions went down to Michigan State on Saturday. You can tell yourself that Penn State is historically just below the blue bloods in terms of accomplishments, and that finishing the year with a couple of losses and a bowl win would be satisfying.

But deep down, not many people truly believe that. There’s a reason why Penn State fans wanted revenge against Ohio State this year, after all. Not just because of the way the game ended last year, but because of the effects of that game. Penn State had been on the brink of making it into the College Football Playoff, and losing to Ohio State effectively eliminated them from the running.

Why was the result so disappointing? Because that team had enough talent to make the Playoff, and they underperformed. It’s the same story with this year’s team, which also lost to Ohio State and now Michigan State… The same two teams that Penn State suffered losses to in 2017. But this year’s Michigan State loss isn’t the same as the one last time.

The team scored less, failing to even put up 20 points, and allowed MSU quarterback Brian Lewerke to bully the defense for 259 yards and a pair of touchdowns. Those are better numbers than Trace McSorley’s 192 yards, and despite putting his all into his performance, the PSU signal caller couldn’t bail the team out again with late game heroics. Not with this playcalling on offense.

You can pretend that it’s business as usual, but the fact is, this isn’t a normal loss and this isn’t the kind of loss that should be expected and excused. The losses against Ohio State in back to back years were bad, but it’s easier to justify those. Ohio State is one of the top teams in the country every year, and many favored them going into those games. You could argue that Penn State holding leads in both games was a fluke, and that the better team won, as expected.

But Michigan State? They’re unranked right now. They already had two losses coming into this game. Not only that, but it was in front of a packed home stadium and it was on Homecoming. Not exactly the best circumstances to drop a game. Some will say that every team loses games. That’s true. But championship teams don’t lose games like these.

Penn State doesn’t need to be Alabama, and finish the season as the number one undefeated team. But they do need to stop dropping games like the Michigan State one this year or even last year, if they ever want to make the Playoff. Some Penn State fans fall into the trap of thinking that the team has to be above average, and not elite.

The truth is, the potential is there to do better. Penn State has shown over the past years that they can play with anybody, after all. If one or two drives had gone differently, they could be undefeated right now. Something needs to change, to unlock that potential.

It’s starting to look like James Franklin’s most successful years were less about him and more about the generational talent coming out of his backfield, Saquon Barkley. And about offensive coordinator Joe Moorehead, who is now in Starkville. It’s time for Franklin to move on from his assistant coaches, because if that doesn’t happen soon, it will be hard to not place the blame on him rather than the rest of his staff.

Of course, Franklin has some benefit of the doubt after playing a big part in bringing Penn State football back to relevance. But it’s becoming increasingly clearer where his ceiling is. Franklin needs to do something to change this perception, that the team will pick up two losses every year under him no matter what the expectations going into the season are. More changes on the staff isn’t what the team really needs, but the play on the field isn’t leaving many option.

Or no changes can happen, and Penn State can become another Auburn. A team that can sometimes play with the top ones in the country, but also one that frequently under-performs based on what the expectations entering the season are. Whatever the case, it looks like this season is going to be a crucial turning point to determine which of those routes the team takes.