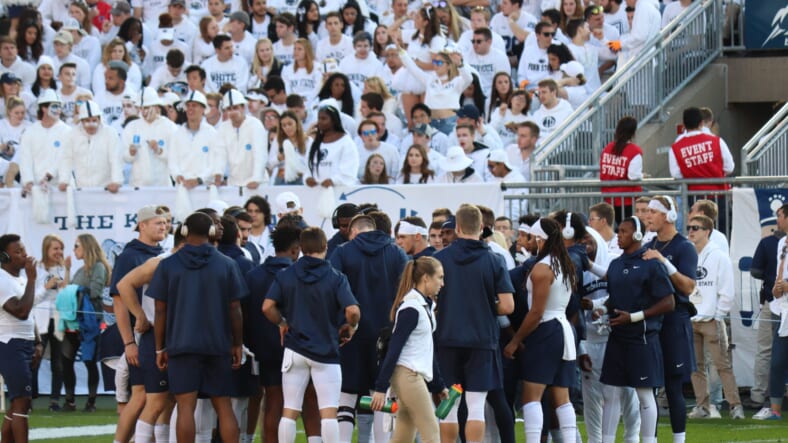 This is a bizarre thing to write at this time of year, but Penn State is officially a basketball school for the rest of the year. There’s really not much to be said that can justify their 42-7 loss in Ann Arbor, against a Michigan team that was favored to win but not in this manor. Most fans would have accepted a loss to the Wolverines. But like this? These are the kinds of results that ruin the mood for the rest of a season.

“Trace at 100%? Yeah, I think helps us, thereâ€™s no doubt about it. But weâ€™ve got to give them credit. Theyâ€™re the number one defense in the country for a reason. That was the bigger difference tonight,” said Penn State head coach James Franklin. But blaming any part of this loss on Trace McSorley not being 100% is a bit absurd.

It’s not that McSorley played a perfect game or even a good game, but there’s many other problems to look at, such as the defense allowing 42 points. The entire team played poorly and it’s hard to believe that even a good game from McSorley would have prevented the final scoreline from being something like this.

You can make an argument that Penn State quit, not during this game but after losing to Ohio State and Michigan State in succession. None of us can be completely sure what caused it, but at least a large portion of the blame has to go on the coaching staff. After all, motivation is one of the main jobs of a coach.

That’s not to take away from Michigan, as they entered as a top five team, but Penn State should have at least kept it competitive for a bit going down the stretch. The team played like one that gave up, and because of it, Penn State is not only eliminated from the conference race but from the hunt for a good bowl game.

No Fiesta Bowl, this year. At this rate, they would be lucky to beat Wisconsin, win out, and maybe make the Citrus Bowl.

There is one good team in Happy Valley right now, however. The basketball team defeated kind-of-sort-of rivals West Virginia in an exhibition leading up to the start of the season, by a score of 84-82. Of course, the game doesn’t mean anything, but it’s an interesting result against the 13th ranked team in the nation,

Forward Lamar Stevens is the top player on the team going into the season, and he managed 20 points and 11 rebounds in what could be a preview of things to come during the regular season. The Penn State basketball program actually has more prestige than you may think, capturing its second NIT title last season by defeating Utah in the title game.

Head coach Pat Chambers also performed well enough to earn himself an extension through 2022. So while the Penn State football team is playing like a team that has quit, that’s not true of the basketball team. The basketball team is the one that won a title last season, and one that might overachieve this season instead of underachieving. Then again, the expectations on basketball are far lower, while the football team was expected to at least compete for the Playoff.

The basketball team will begin their regular season November 9th, against North Florida. They’ll play a slate of easy games against small conference opposition before meeting nationally ranked Virginia Tech on the 27th. The football team, on the other hand, takes on Wisconsin next Saturday before finishing their season with two more games against Rutgers and Maryland.