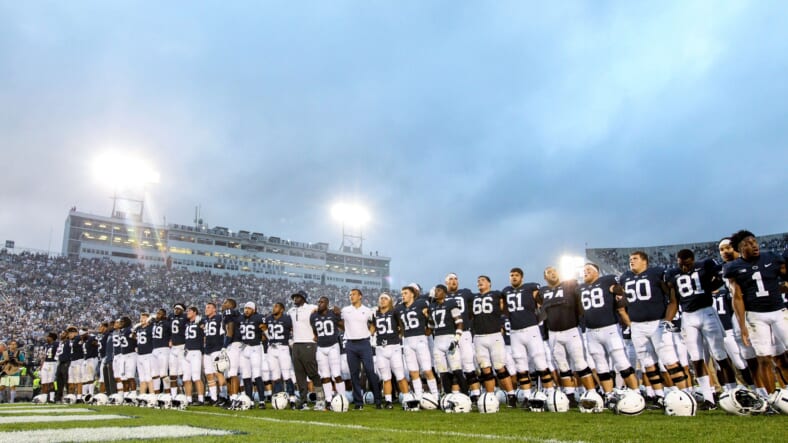 The Illinois game might be the one that Penn State fans are forgetting this season. It’s sandwiched in between the last out of conference game, which ended up being a blowout win, and the biggest home game of the season. The latter, of course, is the white out game against Ohio State.

Everyone in State College wants some revenge for how things turned out last year, and the game is even more anticipated because it’s happening early in the season. No need to wait until Halloween week, this time. Before that game, though, the Nittany Lions will travel to Illinois and will face the Fighting Illini in a night game.

The rundown on Illinois

It’s not that Illinois is expected to do much against Penn State, but Appalachian State wasn’t expected to either. It would be a mistake for the team to overlook this game, especially because PSU is the highest ranked team that Illinois should face this season.

For Penn State, this is a game to be moved past quickly, to get to one of the biggest ones of the season. For Illinois, this might be their only chance of the year to play on Fox Sports 1 in a Friday night game in front of their own fans. But while the occasion is a big one for the Illini, their on the field results haven’t been so great.

Freshman quarterback M.J. Rivers was thrown into the starting job without a lot of preparation, after the favorite for the starting job, Cam Thomas, left the team for personal reasons. Last week out, the opponent was USF and Illinois leaned more on their running backs than their passing game. Their defense also helped them out with a couple of interceptions,

That same defense also showed some weaknesses when they needed to hold a lead and keep USF from storming back to a win. A touchdown to the corner of the end zone put USF back in striking distance at the top of the fourth quarter, and things went downhill from there. It’s not that one touchdown stole the game away from Illinois, and it took a pretty good throw from former Alabama player Blake Barnett to make it happen, after all.

But after that, Illinois allowed a deep pass from Barnett following Randall St. Felix beating their man coverage. They managed to hold USF to just a field goal, but when the Bulls had the ball again, Barnett’s pass to Darnell Salomon wasn’t even contested. It was one of the most wide open touchdowns you’ll ever see, and if Illinois wants to have any hope of hanging with Penn State, they can’t let plays like that happen again.

The verdict is that, while Penn State can’t just look past this game and only think about the one against Ohio State, this Illinois team isn’t in the shape to pull off the upset on Friday night. They might make things momentarily interesting, but after Penn State dropped 63 points on Kent State, Illinois should fear their offense.

Blake Barnett gave them serious trouble, so it’s not a stretch to say that Trace McSorley might do the same thing. Not only that, but their running game will likely have less success against the PSU defense.

They left a clear weakness for Penn State to exploit with their performance against USF, and they can expect just that to happen. The main question is, will they keep things close and surprise everyone by playing well in front of a national audience?