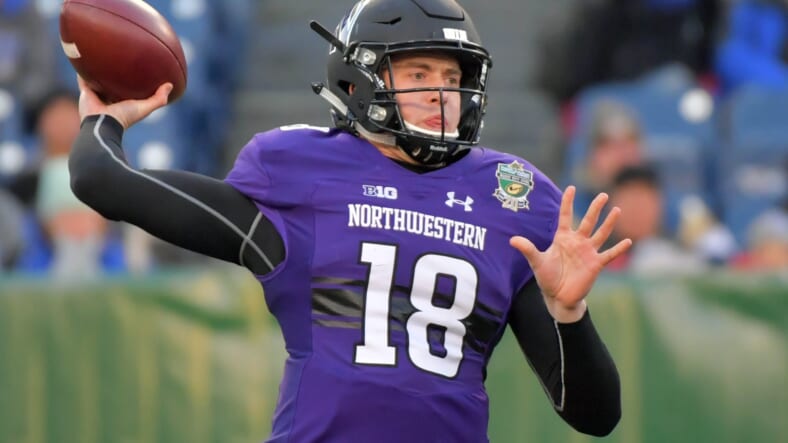 The best football team in Chicago isn’t the Bears. No, it’s the Northwestern Wildcats, who have sometimes been an alright team and have sometimes been an afterthought, but haven’t often been a contender. Northwestern is an academics school, they say. Not one of the Big Ten’s football schools, where sports are just as important as classes and where big time recruits end up every summer.

Somehow, though, this academics school is in the first place in the Big Ten West, and thanks to the results from this latest Saturday of action, they have fewer losses than anyone. Only one loss, while Wisconsin and Iowa both have two. They could have held the position with Iowa right at their heels, or lost it depending on how things went, but Penn State helped the Wildcats out big time by holding on and avoiding another fourth quarter collapse.

Their win over Iowa dealt the Hawkeyes their second loss of the season and gave Northwestern some room to breathe. The Wildcats, though, had their own game to worry about. One against a nationally ranked team, Wisconsin, while Northwestern entered without a rank.

At the beginning of the season, Clayton Thorson was projected to be one of the make or break players for Northwestern. Maybe even the make or break player that would decide whether they were mediocre or whether they made noise on the national scene. Thorson was quietly one of the best quarterbacks in the conference last season but didn’t get attention because he didn’t play for one of the more successful teams. Now, however, Thorson took the spotlight.

Northwestern went down with the first score of the game but it was Thorson who used his legs to give them the lead with two touchdowns on the ground. The first came after three straight quarterback sneaks finally moved the ball into the end zone, and the second one was a longer scramble where Thorson carefully juked around a Wisconsin defender before running the rest of the way and getting across the goal line.

Pretty impressive for a quarterback that entered the season after an ACL tear brought his starting status into question. His legs weren’t the only thing that helped Northwestern win the game, however. Thorson connected with his receiver in the end zone for a deep pass in the third quarter that extended the lead from the four points it was at when the pass happened. The deep pass was nearly ruled as out-of-bounds and had a very low margin for error, but Thorson was able to place the ball well enough to keep it just inside the lines.

The Northwestern defense held Wisconsin to 17 points, linebacker Blake Gallagher having the biggest day with seven tackles and three assists. Wisconsin was, admittedly, missing quarterback Alex Hornibrook. But Wisconsin has never relied entirely on their quarterback and their best player on offense this year is running back Jonathan Taylor, who Northwestern impressively held to 46 yards on 11 carries. That’s a big deal for a player that was one of the Heisman favorites in addition to being one centerpiece of the opponent’s offense.

Northwestern is in a position to play for the Big Ten title if they win out, but their next challenge isn’t against a conference opponent. They face Notre Dame next, the number three team in the country. Winning or losing here doesn’t put them out of the hunt for the Big Ten, but it is a major test against a highly ranked team that will help to prepare them for the stretch. Other than Notre Dame next Saturday, they still have to face Iowa, Minnesota, and Illinois.

Win out, and they shock everyone and get a shot at the East winner. Lose a conference game, and things get dicey. If that happens, the division is back to a four team race.

The Big Ten West might not be the best division in college football, but it sure is one of the most interesting this year. And somehow, despite being unheralded coming into the season, Northwestern is the team that’s jumped out in front of everyone with four games left to play.