New York Jets: Fixes Must Begin with the Offensive Line

The New York Jets are likely the minority team that is happy to see the bye week finally arrived. After a nightmare 0-3 start on the season, fixes need to be made by Adam Gase and company, and it starts with the offensive line.Â 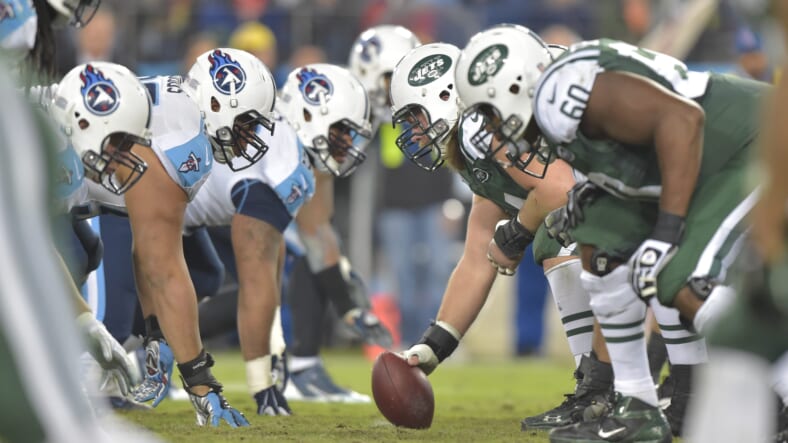 The New York Jets are likely the minority team that is happy to see the bye week finally arrived. After a nightmare 0-3 start on the season, fixes need to be made by Adam Gase and company, and it starts with the offensive line.

The New York Jets are 0-3 on the season, are currently down to their third-string quarterback, have seen injuries on both sides of the ball, and the offense has managed just one touchdown and a meager 13 points in three games. Suffice to say, what could go wrong has gone wrong.

Luckily, a few of those concerns should (and hopefully) will be fixed sooner rather than later. Sam Darnold (should) be back under center by Week 5, and the Jets will be glad to welcome back key defensive personnel such as C.J. Mosley and Quinnen Williams. Demaryius Thomas will hopefully have recovered from a hamstring injury as well.

But other issues will require fixing, and among them is the play of the offensive line, which has left much to be desired so far this season.

The reason why it’s particularly concerning is the realization that the Jets made moves in the offseason to upgrade the offensive line, and create better pass protection. Kelechi Osemele, for example, was acquired via trade from the Oakland Raiders for this exact reason. Osemele is not a bad player, he’s still solid and was a force with the Raiders.

And yet so far, his addition hasn’t helped this offensive line take that next step. The Jets have allowed 13 sacks through their 0-3 start. Last week against the New England Patriots, in which five of those sacks were registered, three came from a four-man rush and one from a three-man rush. Simply put: unacceptable.

The Jets have registered the fourth-most sacks so far this season, sitting alongside the likes of the Miami Dolphins (13 sacks) and Arizona Cardinals (16 sacks) (ProFootballReference). Those franchises are either tanking or at the start of their respective rebuilds. The Jets should be another step ahead, steering in the right direction.

Yes, injuries have ultimately created obstacles too massive for the Jets to overcome through three weeks, and the bye week should help with that. But unless the offensive line gets back on track, it will continuously put Sam Darnold in the crosshairs of the opposition’s pass rush. Subpar offensive line play means there will be no room for Leveon Bell to get going.

Staring at an 0-3 hole is tough, but these changes can and should be fixed. For the offensive line, it might mean simplifying things even more. Unless the Jets accomplish that, then it won’t matter who or how many players come back to suit up. Fixes have to start coming, and it starts with the offensive line.