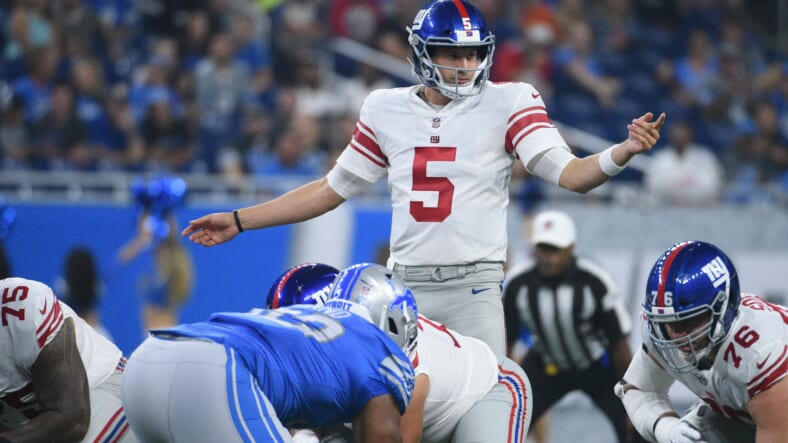 After two preseason games, the one element of the defense that New York Giants fans should have the most confidence in is their run defense. Facing the Browns and Lions isn’t a true litmus test, the Lions had the 30th ranked rush defense by DVOA last season. Still, watching the Giants front seven win their battles and cut off running lanes is encouraging given how soft their front seven performed last year.

He seemed more relaxed against the Lions, he was accurate on short throws and showed off his arm on deep balls to both Sterling Shepard and Russell Shepard. Giants fans should hold off on believing Davis Webb can be the next great franchise quarterback until he plays this well consistently.

Below are additional observations from the Giants 30-17 victory over the Lions:

1) Kerry Wynn has never looked as good in the regular season as he does in preseason. Having said that, he’s looked very impressive so far. I haven’t seen a Giant player look as good as Wynn looked rushing from the interior on his sack of Stafford since Tuck.

2) The best thing that has happened so far in preseason is the Giants staff has learned you can’t play Alec Ogletree in man coverage against anyone. He’s at his best running to the flats or running down hill asÂ a run stuffer. He got exposed again in coverage.

3) Wayne Gallman is the Giants #2 running back. Let’s never even discuss it again this season.

4) This was an impressive grab from Engram on 3rd and 7 towards the end of the 1st quarter. Had a defensive player draped all over him and was able to get himself in good position to make the catch. Webb did a great job of delivering an accurate ball in a muddied pocket.

5) At the 8:58 mark of the second quarter the Giants ran a stunt with B.J. Hill and Kerry Wynn, resulting in Hill getting a hit on the quarterback right before he released the ball. The Giants will have to get creative like that to get pressure from their front four.

6) This was a great bounce back performance from Webb. The Giants actually developed a game plan this week, unlike last week when they faced the Browns. That may have helped. His balls to both Sterling and Russell Shepard were impressive.

7) Lauletta moves well in the pocket. At the 14:21 mark in the 3rd period he evaded a free rusher and also looked comfortable on his touchdown run. His ball to Adams is a great example of how instinctive it is for Lauletta to step up in the pocket. However, he wasn’t accurate with his balls down the field.

9) Lorenzo Carter exhibited great instincts on this play by not getting fooled by the playaction and displayed his athleticsm with tight coverage on the tight end.

10) I love this play call against man coverage. The Giants set a pick play to free up Hunter Sharp on a wheel route. They struggled to find ways to get their receivers open under McAdoo. It was refreshing to see this type of play design.

11) As a Rutgers alumn I’m not surprised with how great Robert Martin has looked. It’s a shame the Giants invested so much in Stewart, Martin is clearly the third best back on this team.