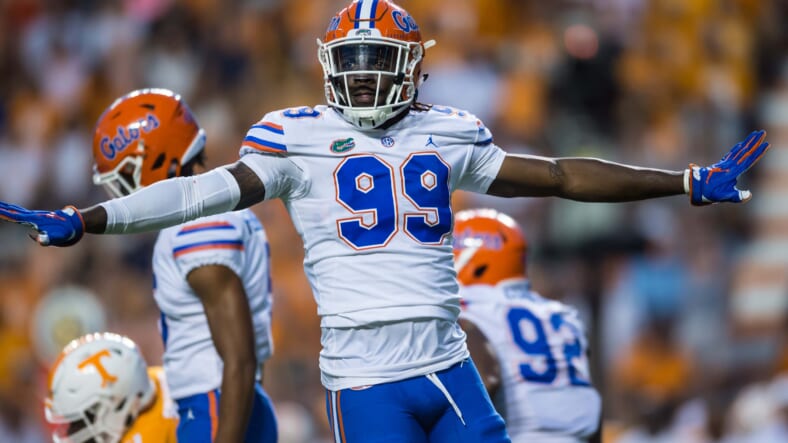 His last name might be Polite… but on the football field, he’s as rude as they come.

Jachai Polite is 3-4 edge rusher out of the University of Florida. He decided to declare for the 2019 NFL Draft after a productive junior season. Polite is expected to be selected in the first round of the draft.

In his junior year, Jachai was able to total an impressive 11 sacks. On top of that, he added 19.5 tackles for loss. Polite was also able to force 6 fumbles and have 4 passes defended.

Jachai Polite has a variety of elite speed-rush moves. He is able to win with the spin move, swim move, and his incredible bend. His bend allows him to win on the outside and make his way back to the quarterback. His frame and flexibility are ideal for NFL edge defenders.

Consider me firmly on the Jachai Polite train ? pic.twitter.com/5r9t2pICEs

Jachai is a thin edge defender, which is the reason for his speed. He should be expected to run a quick 40 yard-dash. His speed and quickness off the edge could draw comparisons to Von Miller. It is one of his biggest strengths and makes him an exciting prospect in this class.

Jachai Polite is an elite speed-rusher, however, every prospect has his flaws. Polite is not limited as only a speed-rusher, but he is not elite in run defense. He can hold his own, but he will not be a strong, consistent presence against the run. Polite might need to gain weight and strength once he makes it to the NFL.

Too often Jachai gets pushed off of the line and out of the play against the run. He also does not have enough strength and power to move tackles into running lanes. He is a secure tackler and has solid pursuit, so if the runner comes in his area, Jachai will make the play. But he has not consistently shown the ability to go through blockers to get to the runner.

Right now, days before the 2019 NFL Scouting Combine, Jachai Polite is considered a top-25 pick in this year’s draft. However, he has room for improvement. Some added weight and an impressive showing in the bench-press could move him up some teams’ draft boards.

Jachai will be expected to perform near the top of his position’s class in the dash, shuttle, and cone drills because of his speed and quickness. But if he performs well in the strength tests and interviews too, he could improve his stock.

Polite is not expected to be a top 10 pick. But, if the Giants move back between picks 10 and 20, Jachai Polite could be a home run selection along with the added draft capital the Giants would acquire in that trade.