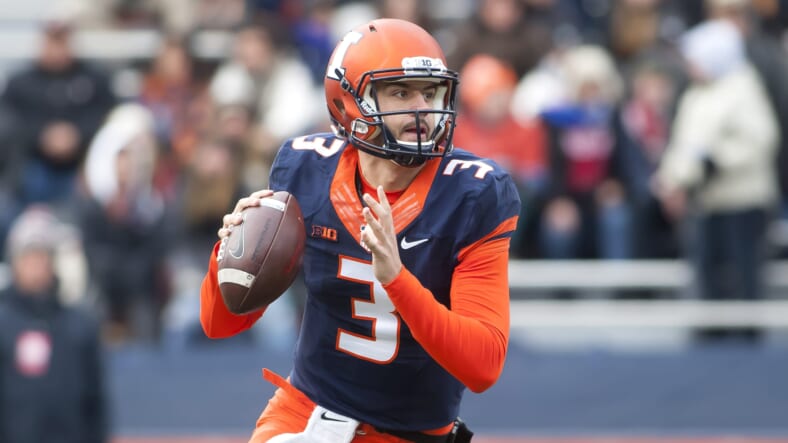 Michigan quarterback Jeff George Jr. already has one transfer under his belt, but it looks like he didn’t find what he was looking for with the Wolverines. George, who is of course the son of 13 year NFL veteran Jeff George, joined Michigan leading up to this season after previously being a contender for the Illinois starting quarterback job. He’ll leave the team, though, without taking a single snap in a game.

George spent the last three seasons with Illinois, registering the most playing time during the 2017 season. Illinois had a carousel of quarterbacks last year, but George won playing time regardless and threw for 1,273 yards and seven touchdowns. Not bad for a team that went 0-9 within the Big Ten conference and didn’t exactly provide much support for its quarterbacks.

If George had stayed with the Illini, he would likely be the starting quarterback this year. Instead, he made the move to Michigan over the summer despite not having much chance to start. It looks like George hasn’t given up on his football career, though. According to The Wolverine Lounge, he’ll head to Pittsburgh as a graduate transfer.

Pitt’s likely starter, Kenny Pickett, is a sophomore who is much less experienced. He featured in four games last season, making 66 pass attempts with a 59% completion percentage. He’s competing with another transfer, former USC and Arkansas quarterback Ricky Town. The addition of George should make the QB competition more competitive than it already is, as George showed a good amount of potential while playing with Illinois.

Back in Ann Arbor, it seems that Shea Patterson has won the job. The case of the Ole Miss transfer should be one of the more intriguing ones in the country, as Patterson may be the first true star quarterback that Jim Harbaugh has had since taking over as head coach of the Wolverines.

The fact that Michigan and Pitt both have quarterback battles featuring transfers just goes to show how much they impact the game nowadays.