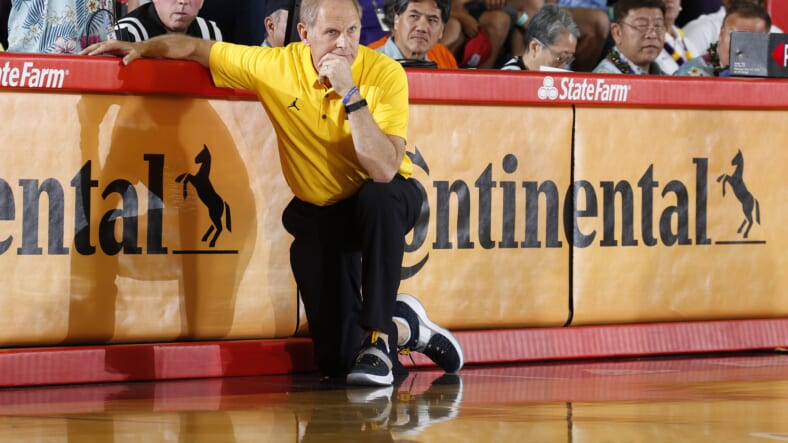 Nov 20, 2017; Lahaina, HI, USA; Michigan Wolverines John Beilein looks on from the sidelines against the LSU Tigers in the second half during the first round of the Maui Jim Maui Invitational at the Lahaina Civic Center. Mandatory Credit: Brian Spurlock-USA TODAY Sports

Can you imagine Michigan basketball head coach John Beilein getting ejected due to technical fouls? It’s not something that generally happens, so it’s understandable to be surprised or even shocked that it happened in Michigan’s upset loss to Penn State, which has been at the bottom of the conference all season and could be called the Big Ten’s most disappointing team.

Despite their disappointing season, however, Penn State was up 40-27 at halftime on the #6 team in the nation, Michigan. Beilein, however, disagreed with the buzzer beater that put the Nittany Lions up by that margin going into the break, and after voicing his opinions to the referee, picked up not one but two technical fouls in quick secession. The fouls resulted in Beilein being thrown out of the game, and Michigan would fail to bounce back without their head coach.

Things are not going as planned for Michigan in Happy Valley. ?

First @PennStateMBB hits a buzzer-beater to go up 40-27 at the break, then John Beilein gets tossed with two quick technical fouls: pic.twitter.com/Kjj88kbqSV

Beilein reacted after the game to the ejection, and said that he’ll be dealing with the league office soon about it. “I havenâ€™t been thrown out of a game since… I think it was 78-79? So about 20 years before most of you were born. And you know me, I very rarely get a technical, so Iâ€™ll deal with the league office going forward and see what I can do differently.”

Beilein went on to take a cautious approach and avoid talking about the call that led to the technicals in the first place. “Iâ€™m not going to comment on that, that would not be good... There will be some pretty interesting discussion with the Big Ten office, I will say that.”

Bad call or not, Penn State ended up winning by a margin where it doesn’t matter. The result has some very interesting implications for the Big Ten because it puts the Wolverines under their in-state rival, Michigan State, in the standings. With both teams holding an 11-3 conference record, the final stretch of the season will be much more important.