Iowa Football: Can Nate Stanley Do What Others Couldn’t? 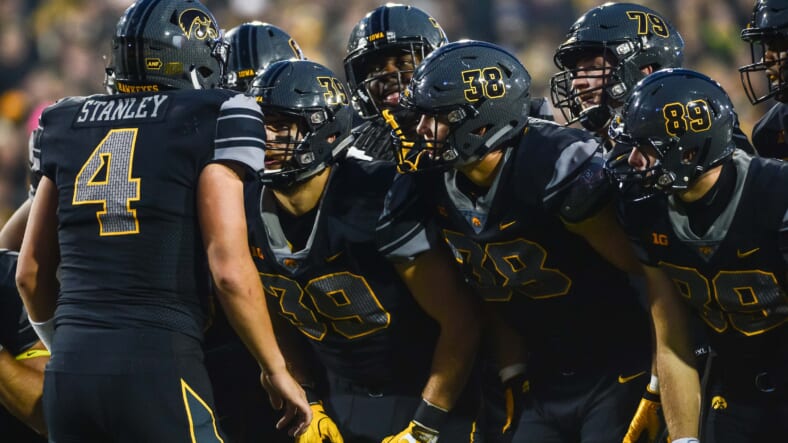 It seems like Iowa is always a factor in the Big Ten, whether they’re in contention to win it or not. Even if Iowa themselves aren’t one of the contenders to win, Kinnick Stadium has gained a fearsome reputation among visiting teams. As Ohio State learned last season, back when they were ranked number six in the country, anyone can fall victim to the upset when playing away at Iowa.

Still, Iowa needs more than just a home field advantage to get back to the conference title game, which they lost after going 8-0 during conference play during the 2015 season. A good quarterback is absolutely essential to that goal, and they might just have that on hand with Nate Stanley. Stanley managed to take the starting job as a sophomore, and put up good numbers.

Despite being new to the role, his 2,432 yards came in at number seven in the conference. That’s not bad, considering that some of the names just above him in the rankings are much more well-known: Alex Hornibrook, Brian Lewerke, and J.T. Barrett. Of course, Barrett has graduated by now, and another name from the list, Tanner Lee, can be removed because of the NFL Draft.

When you look at Stanley’s game, accuracy stands out as an area to improve. It’s based off of a couple of things. The first is his completion percentage, which was only 55.8% last year. Good enough to get him in the top ten of the conference, but poor enough that he ended up at number nine in completion percentage rather than in the top five.

The second thing to look at is his throwing mechanics. Stanley has power in his arm, but strangely enough, doesn’t seem to generate as much velocity as some of the other top quarterbacks. His passes sometimes use more of a lobbing style, and while this is useful in some situations, it also gives defenders more time to get in position and break up or intercept the pass.

His short and medium accuracy, though, is better than his deep accuracy. It’s also worth considering his pocket presence. While Stanley is fully capable of rolling out, something that’s useful on play action passes, most of his throws come from within the pocket. Even when playing defenses such as Penn State and Ohio State, who broke through the offensive line on some occasions, Stanley played smart enough to not take unnecessary sacks.

Against the Buckeyes, for example, a couple of Stanley’s touchdowns were thrown with defenders all around him. Most notably, he had one of the best highlight reel plays of the game when he threw a touchdown while Sam Hubbard was still holding onto his leg. It wasn’t the only big play he made under pressure, in either the win over Ohio State or the close game with Penn State.

So what should Hawkeyes fans expect this year from Stanley? He probably won’t be the top quarterback in the conference, but he has the tools to be among the best when he makes some improvements entering his junior year. The difference between a first and second year starter can be huge depending on the player, and at least some of Stanley’s weak spots should show less this season.

Iowa isn’t the Big Ten school that most fans associate with quarterback play, but this year, their fans can rest knowing that their signal caller isn’t intimidated in the slightest by the tough defenses that Iowa will have to face in their hunt for the conference crown.