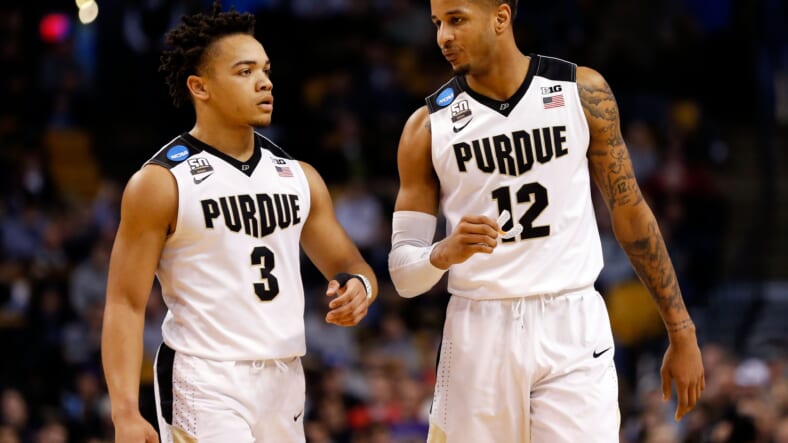 Mar 23, 2018; Boston, MA, USA; Purdue Boilermakers guard Carsen Edwards (3) and forward Vincent Edwards (12) talk during a media time out during the second half against the Texas Tech Red Raiders in the semifinals of the East regional of the 2018 NCAA Tournament at the TD Garden. Mandatory Credit: Greg M. Cooper-USA TODAY Sports

College basketball season is underway, and it’s time to see how some of the top players in the Big Ten are doing. Michigan State went down to Kansas on the first night of the season, but some of the other teams in the conference, including Purdue and Indiana, picked up wins. Of course, those two teams are notable for having players who are expected to contend for Player of the Year awards come the end of the season.

There’s a bit of a contrast here with Romeo Langford being the highly anticipated freshman newcomer and Edwards already having experience, as a junior who looks to take his game to the next level this year.So far, that experience has given Edwards a bit of an advantage. He put up 30 points in Purdue’s second game, a victory against Fairfield.

Edwards’ jumpshot shone specifically in the performance, as well as his shooting from deep. However, Edwards isn’t the only highly touted Big Ten player to put on a scoring performance recently. Freshman Romeo Langford scored 19 in his college debut, for state rivals Indiana. In contrast with Edwards and his range, Langford was more aggressive and scored from around the basket.

Langford didn’t put up as many points as Edwards did, but that’s reasonable considering his status as a freshman. Going into the season, he’s perhaps the most highly rated freshman that doesn’t play for the Duke Blue Devils. Langford will also be one of the most important players for second year head coach Archie Miller when Indiana faces some of their tougher non-conference opponents such as Marquette and Arkansas, and eventually, a top three Duke team.