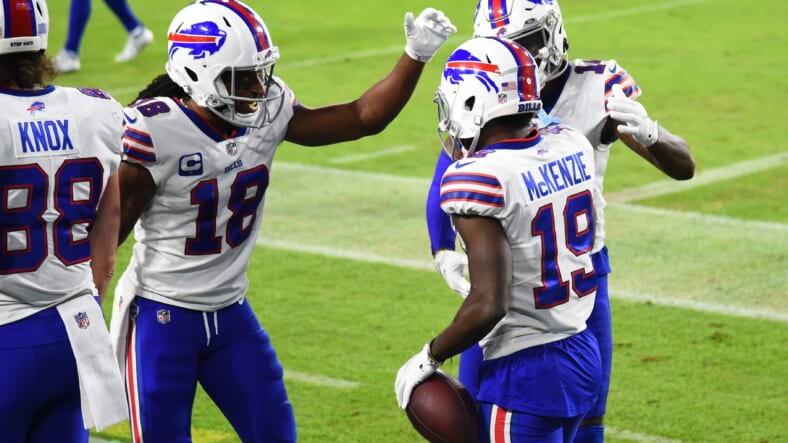 The Buffalo Bills have found some reliable top receiving targets, but will need to analyze the options behind them this offseason.

The (Minneapolis) miracle worker made an immediate impact in his red and blue debut, earning 1,535 yards on 127 receptions…each establishing new team records and led the NFL. Buffalo had their passing weapon in Josh Allen but they now appear to have a strong tandem that can cause Kelly-to-Reed-style levels of offensive destruction. Few can question the potential future Diggs has created in Buffalo. An enduring image of the 2020-21 AFC Championship Game is Diggs watching the Kansas City Chiefs’ celebration from afar, the lone man clad in white to remain on the field.

Diggs wasn’t the only one to enjoy a breakout with the Bills. Cole Beasley likewise earned career-best numbers (967 yards on 82 receptions) while Gabriel Davis established himself a valuable day three find, as he was among four others first-years tied with seven touchdown receptions, second-best amongst rookie competitors.

Yet, the unprecedented success the Bills found last season was tough to celebrate because of the lack of Super Bowl at the end. Startling as such a leap would’ve been, Davis admitted that the semifinal heartbreak made it difficult to watch the Big Game.

â€œI couldnâ€™t watch it because it made my stomach hurt. I feel like we should have been there,” the Central Florida alum told Chris Hays of the Orlando Sentinel. “Thatâ€™s our standard, obviously, now. We set the standard and weâ€™re playing to be above that standard every single year. So our guys are going to get back to work and weâ€™re going to be ready to go, and hopefully, we get a big one next year.â€

While the Bills are obviously pleased with the output from the top of their depth chart, they’ll have to analyze their alternative options this offseason. In addition to McKenzie and Roberts’ expiring contracts, the team also has a decision to make on John Brown. The former Baltimore Raven was unable to capitalize on a career-best season in 2019 as he missed several games due to injury. Buffalo would save over $6.3 million if they were to move Brown through either a release or trade.

In a year where seemingly every Bills receiver was setting new career-bests, McKenzie was no exception, albeit on a smaller scale. He put up 282 yards and became a reliable red zone target with five scores. The man of many talents also earned a passing score through trickery and took a punt back for a score during Week 17 proceedings.

Roberts has been a consistent Pro Bowl representative for the Empire State, making the last three and the most recent two as a member of the Bills (he notably caught a touchdown pass from Lamar Jackson in the 2019-2020 game). Roberts continued to make himself a valuable special teams commodity in 2020, despite getting deeper into his 30s. Appropriately, Roberts led the league with a 30-yard average on kick returns.

If they do, likely not until the latter stages. Their top three receivers from last season are all back, and they also might try to develop Isaiah Hodgins, a sixth-round choice in 2020 who missed all of his rookie campaign with an injury. Their reserve/future signees could be diamonds in the rough as well. Kumerow and Williams have extensive professional experience (Williams being a CFL All-Star in Edmonton) and Gentry, a draftee of the XFL’s New York Guardians, was Allen’s favorite target during their shared tenures as (Wyoming) Cowboys. Late projects on day three could be Davis’ former UCF teammate Tre Nixon or Michigan’s Ronnie Bell, who could be a slot-mate for Beasley.

The idea of more offensive firepower in Buffalo is the subject of nightmares in East Rutherford, Foxboro, and Miami. But Samuel is an elite target that’s a realistic option for Buffalo (which likely would require Brown’s release). One of general manager Brandon Beane’s final moves in Charlotte was taking the Brooklyn native with the 40th pick in the 2017 draft. Samuel will likely be looking for some stability with his second contract, but he well could be the proverbial “one move away” from truly pushing the Bills into the aura of Super Bowl contention.

If the Bills wind up letting both Brown and McKenzie walk, Perriman would be a solid consolation prize in terms of speed and experience. It was clear last season that Perriman isn’t the type of player who can headline your receiving corps, but there’s hope he can create a good NFL career as a solid support man.

In some ways, it’s almost fate for Beebe to don red, white, and blue. Born in Buffalo and the son of a Bills legend (Don), Beebe can be the veteran depth option the Bills need if they’re forced to part ways with Brown or lose McKenzie.

Overall, the Bills are more or less set with their top-heavy receiver depth chart. It’s unfortunate that Brown’s Buffalo journey might not continue, but that cap space earned with his moving (Buffalo currently ranks 20th in available cap space going into free agency) might be too much to resist. Expect the Bills to bring in a free agent or two to compete for a roster spot, as well as someone with return skills if both Roberts and McKenzie walk.