Big Ten: Michigan vs Notre Dame Is A Game To Look Forward To 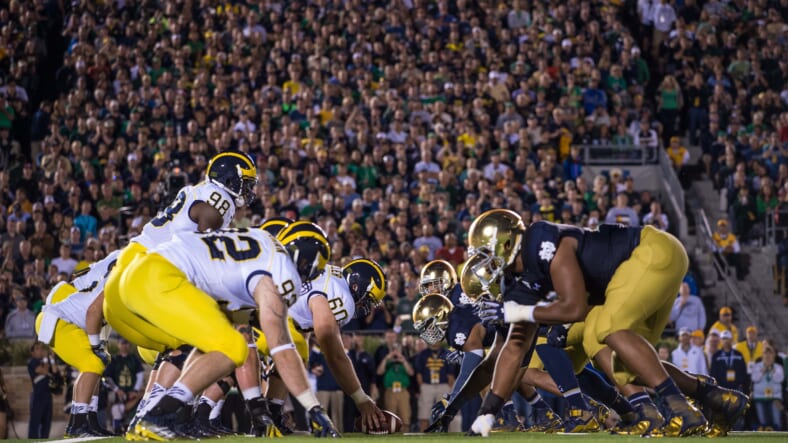 There’s been plenty of complaints in recent years about the quality of non-conference matchups in college football. Some teams schedule cupcakes and head into conference play undefeated every year. Others risk their records against tough opponents, but do it at neutral sites.

Well, fans of the more traditional home and home method of playing non-conference games will be happy with the return of the Michigan and Notre Dame rivalry, which will be played during week one. Michigan has perhaps the most to lose of any Big Ten team in week one, and that’s part of what makes the latest iteration of this rivalry game so interesting.

If the Wolverines pull off the win in South Bend, many will assume that it’s just because of another Notre Dame disappointment. The Fighting Irish are the higher rated team in both the AP Poll and the Coaches Poll, with Michigan being unranked in the former. But their recent history of underwhelming seasons under Brian Kelly means that they’ve been devalued as a quality win.

This will become very relevant in the playoff conversation, if Michigan is still contending at that point in the season. On the other hand, however, a loss to Notre Dame would do more than just start the season off on the wrong foot. Head coach Jim Harbaugh has had a grace period with the Wolverines, but that’s coming to a close soon and fans expect results. If the team starts 0-1, you can expect a negative atmosphere to follow the team into the coming weeks.

You can also expect fans and media to ask how Michigan will beat Ohio State and Penn State if they can’t beat Notre Dame. Things are largely similar on the Notre Dame side. As the eleventh ranked team in the country, losing to an unranked rival would be an embarrassment. Even if that rival is a dark horse to contend for the Big Ten this year.

It’s not just the pressure surrounding the game that makes this matchup great, though. The keys to the game lie in opposing areas for each team. Notre Dame senior Brandon Wimbush has some hype going into the season, and could be a surprise contender for the Heisman Trophy. But Michigan’s defense is once again one of the better ones in the conference, and possibly the country as a whole.

They bring back Rashan Gary and Chase Winovich, both of whom are feared pass rushers. Additionally, Michigan’s secondary had the lowest passing yards per game average of any team in the country. That’s a very impressive stat, considering Michigan beat out a number of teams that have reputations for defense and were more successful overall, such as Wisconsin, Alabama, and Clemson.

Notre Dame lost both Quenton Nelson and Mike McGlinchey to the NFL Draft. Can they protect Wimbush long enough for him to get his throws off? Will Wimbush even be able to throw on a defense that allowed less passing yards per game than anyone in the country?

If the Michigan defense holds strong as they did in many games last year, the improved offense should have a chance to shine. Shea Patterson will likely enter the season as a starter, and will have a chance to show a national audience why he was compared to Texas A&M Heisman winner Johnny Manziel. He’ll have the help of sophomore receiver Donovan Peoples-Jones, the number one receiver recruit in the 2017 class and a player expected to step up his performances this year.

All of it makes for an exciting game where both teams will have to play to their strengths. It will all happen on week one, and will perhaps make for a better kickoff to the season than Washington and Auburn, who play in this year’s iteration of the Chick-fil-A Kickoff game.