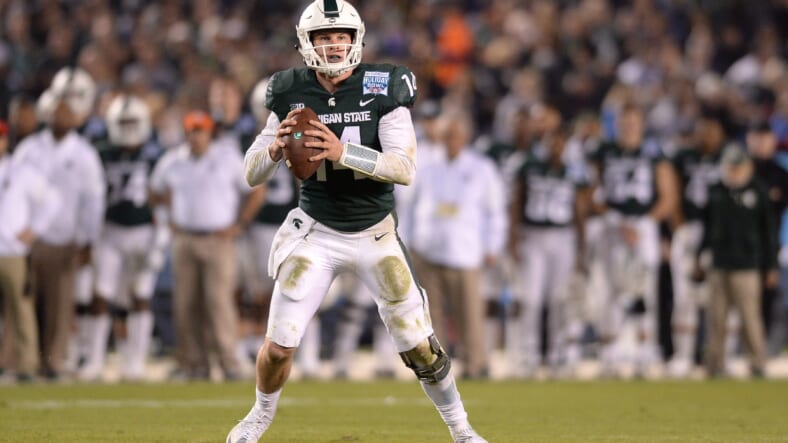 It seems like the season just started, but we’re already five weeks into college football. This week doesn’t have as many marquee matchups, but it does have some games worth watching and Saturday evening will be capped off by one of the biggest games of the year, both in the Big Ten Conference and nationally. All of the Big Ten teams that are playing this week will have their games today, with no early midweek games this time around.

What games can fans check out?

The Big Ten Network is televising one of the first games of the day, with a noon kickoff. This isn’t one that’s going to draw in neutral fans, however, because it’s between Rutgers and Indiana. The Scarlet Knights are looking for a better showing in front of their home fans after MAC contenders Buffalo came into their house and beat them 42-13 last Saturday.

It wasn’t a pretty showing for Rutgers. They gave up two touchdowns to both the top quarterback and top running back for the Bulls, and while UB is 4-0, it’s still not a good loss considering the lower conference that Buffalo plays in. Also, losing 42-13 at home to MAC opponents isn’t a good way to keep fans in the seats for the rest of the season.

Indiana is in a better place and has three wins so far, their only loss to nationally ranked Michigan State. Based on momentum, an Indiana blowout win isn’t out of the question.

This one is the first Big Ten game of the day that features a ranked team. That ranked team is Michigan State, which should come out guns blazing and look to bounce back from the decent performance but overall loss against Arizona State, in a game where a good amount of people penciled them in as the winner. The Spartans have had a long break since that game, which was on September 8.

All of that doesn’t help Central Michigan, a team that’s 1-3 and coming off of their sole win… Which was against FCS opponent Maine. They lost all three of their opening games, but to their credit, they did face SEC opposition Kentucky as well as the Big 12’s Kansas. While neither of those schools are powerhouses, they have much more in the way of resources than the Chippewas do.

Their passing defense is actually decent, they haven’t allowed an opposing QB to throw for more than 200 yards this season after all, but they gave up almost 300 yards on the ground to Kentucky and will likely give up a lot to the Michigan State running attack led by L.J. Scott.

You can watch this game on Fox Sports 1 if you want, but don’t put too much faith in CMU to pull an upset here. Not with MSU having extra time to prepare to bounce back after their loss to ASU.

This one is interesting for the wrong reasons. Well, more specifically, it’s interesting because everyone wants to see if Scott Frost is going to pick up another loss in his rookie season as the head coach of the Huskers. It would be hard to imagine things starting this way before the season, but Nebraska’s most recent result was a blowout loss at the Big House where their defense gave up 56 points and looked like it was closer to a FCS level.

Purdue, on the other hand, has had good form in the past couple of games. A win over Boston College, a very close loss to Missouri that featured an important bad call from the referee. They were upset by Eastern Michigan before that, but it was by one point. Purdue has played everyone close this year and should come in as the favorite. Form matters, and Nebraska’s form is historically bad while Purdue has stayed in every game.

This one won’t be televised on Fox Sports, though, and you’ll have to tune into the Big Ten Network if you want to watch it at 3:30.

The first of the two Big Ten games that feature top fifteen teams is Northwestern versus Michigan. The Wolverines have to go on the road for this one, and it shouldn’t be too hard of a task for them. Northwestern is struggling this season and has a couple of bad losses already after winning their season opener and looking decent in it.

Back to back home losses followed that win, against Duke and Akron. This is the last game of that home stand before Northwestern has to head back on the road to face the other major team in Michigan, the Spartans. But it doesn’t seem like they’ll get a win in front of their home crowd.

Michigan rushed for 285 yards against Nebraska while only allowing 39 yards on 30 attempts. Realistically, it’s a good result for Nebraska to make this a competitive game and not fall victim to the same fate as Michigan’s last opponent, a blowout loss where everyone couldn’t wait for it to be over by the time the fourth quarter arrived.

This game is being broadcast nationally on FOX, meaning neutrals will hope for it to be a close result.

It doesn’t take much explaining why this is the best game of the week. The circumstances around the meeting between these two budding rivals means that the division title may be on the line, and in turn, a trip to the Conference Championship Game and potentially a trip to the College Football Playoff. If neither team slips up for the rest of the season, it will mean that this was the game that decided the Big Ten East.

Penn State is ranked lower, but you can through rankings out the window. They’re going to change after this game no matter what the result is, anyway. Penn State can make a large gain by winning, but the loser will almost certainly fall significantly after taking their first loss. Not only that, but two Heisman contenders are battling at the quarterback position in Dwayne Haskins Jr. and Trace McSorley.

The game is a White Out, something that Penn State has mastered. You can be sure that the atmosphere will help, and it makes the result even harder to predict. If you care about the Big Ten at all, or just want excitement, this is the game to watch tonight. With it starting at 7:30, the rest of the Big Ten will have played already by the time this one kicks off.