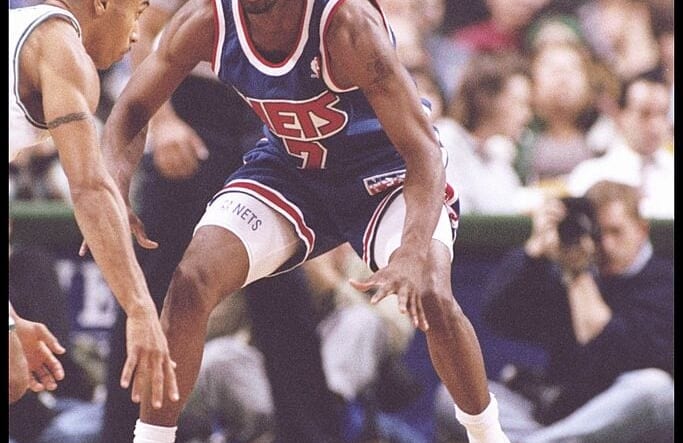 1 Dec 1995: Guard Kenny Anderson of the New Jersey Nets moves the ball during a game against the Boston Celtics at the Fleet Center in Boston, Massachusetts. The Nets won the game, 131-123. Mandatory Credit: Allsport /Allsport

Last night on Fireside Nets w/ Spen & Nick, we interviewed former New Jersey Nets Point Guard Kenny Anderson. For those who don’t know, Kenny Anderson is arguably one of the best point guards to ever play for the Nets. Although he only played for New Jersey for 5 seasons, Anderson averaged 15.3 points and 7.8 assists with the Nets and formed a lethal combination with big man Derrick Coleman. He ended up playing 15 seasons in the NBA, playing for 8 different teams during his career. Anderson is also one of the greatest high school players to ever come out of the five boroughs (NYC) and had two unbelievable years at Georgia Tech.

Here are a few excerpts from the Fireside Nets (FN) interview with Kenny Anderson (KA):

FN: You had two unbelievable years with the Yellowjackets (Georgia Tech) before moving on to the NBA, what did it feel like the night you scored 50 points?

KA: 50 was great. I’m glad I still have the record down at Georgia Tech. That whole week I think I scored 90 points in 2 games. Against Georgia I had 42, and then 50 against Loyola Merrimount. It was a crazy weekend man, I was just balling. I felt just felt good.

FN: Tell us a little bit about the beginning of your career with the Nets?

KA: In 91, I went #2 in the draft to the New Jersey Nets which I loved because I was at home, my mother lived in New York, my family, my friends, my high school coach was in New York, but I was holding out for more money and I came into training camp late. We already had a great guard on the team in Mookie Blaylock, so I didn’t play a lot my first year, he (Blaylock) got hurt, and I played half of the year and played extremely well, so my coaches told me to stay ready, when they call you just go out and play. But I didn’t play a lot so I had time to learn how the NBA game was played, so that’s what I did.

FN: What was the reputation of the Nets organization at the time in 1991?

KA: You could tell it was about to turn, they had made the playoffs the year before. But we had seven owners, and that’s where it got a little difficult. You need one owner, one idea, and to just go for it. And then they brought myself and Derrick Coleman in after the draft, but they were always firing coaches, until they brought in Chuck Daly.

FN: You bring up Chuck Daly, what was it like for you playing for such a great coach like Chuck Daly?

KA: Oh it was awesome. He was great for a young Derrick Coleman, we had Drazen Petrovic, and Kenny Anderson, I came in (with Chuck) and was doing everything the right way. It was a great fit, he did a great job. That was the year we were on our way, and then I got a bad foul by John Starks, he pushed me out of the air and broke my wrist. I think we were in 2nd place, we were rolling and then I had to sit out the rest of the year.

FN: Was it (the Starks Foul) a dirty play?

KA: Yeah everybody do, my moms, my family thought it was a dirty play, it was a hard foul, who knows. But I didn’t take anything from it, just moved on. The Knicks that year, they played a very physical game. Very stout. And that’s what you had to be aware of, and I was. It is what it is.

Kenny was an excellent guestÂ and we look forward to our virtual game of HORSE with him in the future! Check out our Facebook,Â Twitter, andÂ InstagramÂ for your latest Brooklyn Nets news and listen to theÂ Fireside Nets w/ Spen & Nick podcast.