On this Date 8 years ago, the Nets played their last game in New Jersey 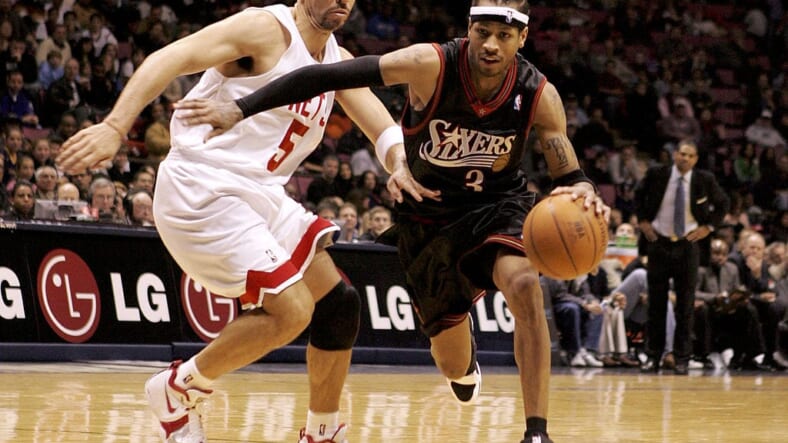 EAST RUTHERFORD, NJ – DECEMBER 10: Allen Iverson #3 of the Philadelphia 76ers drives past Jason Kidd #5 of the New Jersey Nets during their game at Continental Airlines Arena on December 10, 2005 in East Rutherford, New Jersey.The Sixers defeated the Nets 107-95. NOTE TO USER: User expressly acknowledges and agrees that, by downloading and or using this photograph, User is consenting to the terms and conditions of the Getty Images License Agreement. (Photo by Jim McIsaac/Getty Images)

On April 23rd, 2012, the Nets played their final game in the Izod Center after their 2-year stint in Newark, thus ending the franchise’s run of 35 seasons in New Jersey.

Marshon Brooks (18) and Kris Humphries (16 pts 12 rbs) lead the Nets in scoring while Gerald Wallace, Johan Petro, and Armon Johnson all scored in double figures. Also on that Nets team was Gerald Green, Anthony Morrow, and DeShawn Stevenson. Deron Williams and Brook Lopez were inactive for that game. In Avery Johnson’s 2nd to last year as Head Coach, the team finished the season 22 – 43 that season. Here is one of the few highlights from that season:

It wasn’t until their move to Brooklyn and acquisition of Joe Johnson that the team finally started winning again. But from 2007 to that final game in 2012, the New Jersey Nets were one of the worst franchises in the NBA, finishing each of those five seasons with losing records.

It’s the horrible seasons fans are forced to endure that make the successful ones that much sweeter. When Brooklyn holds that championship trophy in the next few years, the same Nets fans that suffered from 2007-2012 will be the loudest ones cheering, and I will be among them.