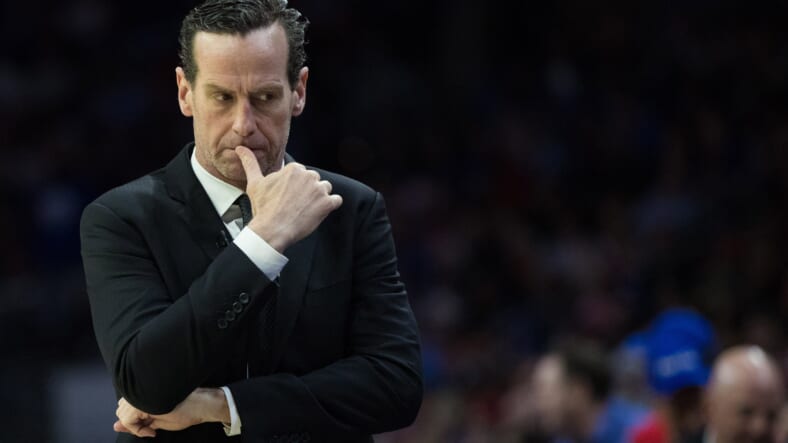 It’s not the regular season, but Brooklyn Nets basketball has made a return. So when Nets fans saw that their team would be playing on October 4th, they didn’t care that it wasn’t against another NBA team. They were just happy to see that their team play on their home court again (the new court looks great by the way). So here are some thoughts from the Nets home win against Sesi Franca (137-89).

The Nets opened up the preseason with a starting lineup of the following:

When asked if people should read into the Jarrett Allen start, Kenny Atkinson responded with not at all and that the team was trying out various rotations. So with that being understood, we still aren’t 100% sure whether or not Jarrett Allen will be the for sure starter. Seeing Kurucs out there on the floor, especially in a starters capacity, put me at ease. With the off the court issues, he has come into his second year, it’s good to see him just playing basketball. He got the start at the 4, the position he found himself in his rookie campaign. Prince closed out the frontcourt starters.

Levert and Dinwiddie were our starting backcourt. This is a line up that is pretty familiar with each other with the exception of Prince. Allen, Spence, and Caris have played with each other for a few years now while Kurucs started next to Allen for much of last season. In this lineup, Prince would basically be taking the Joe Harris.

Speaking of Joe Harris, he was not in the starting line up. In fact, he did not log a single minute. This is probably to rest the NBA’s best shooter from 3 last year. He played almost all of last season, the intense playoffs, and was on Team USA this summer. Rest is probably for the best, got to keep a shooter’s legs fresh.

Obviously, the team isn’t completely healthy or available. Kyrie Irving didn’t play this game, but will most likely play next week Thursday. Kevin Durant isn’t stepping on that court anytime soon. There’s no question that Spencer Dinwiddie will probably be headed to the bench with the return of Kyrie Irving. The real question is will Joe Harris start? If he does who sits, Kurucs or Prince. If I had to guess, I’d predict that Prince will join the second unit. Just for the sake of familiarity and continuity. It also gives the bench that lethal floor spacer (as you saw against Sesi if you happened to watch the game).

-Quick notes. David Nwaba shot well from three which wasn’t exactly the strength of his game. That along with his constant movement on offense and defense are welcomed sights. Honestly, he probably had the highest motor on the floor. Cuts were hard and fast. Constant movement on the floor to get himself and shot or be a bailout option. He made the extra pass willingly and consistently. It also showed a determination on defense, even on players that dwarfed him. Maybe him seeing some time at the 4 isn’t a complete joke.

-Prince shooting is as his stats from the last two seasons have advertised. He is a true snipe, shooting 67% from out beyond.

-The team has looked to feed the paint, although not through the post. Lots of lobs, drives, and drop-offs. The bigs ate often with them shooting a combined Â 14/15 shooting from the floor.

-Levert’s vision and playmaking were on full display. With that being one of the positives of his game, I predict he’ll spend some time at the point with Kyrie and Spencer being the only two point guards on the team.

-The new rook Nic Claxton looked great. Full of energy on both ends of the court. It’ll be fun to see how he develops.

-Theo, who has spoken on possibly spending some of his court time as a floor general, had 7 assists.

If you watched, you saw the greatest shooter to ever light the Nets up early and often. Hettheimeir shot a blazing 8/10 from the arch. I’m counting that more so to a hot hand vs panicking from stretch big defense. Perimeter defense concerning Jarrett Allen, especially if he has to pick up guards in the pick n roll. Deandre Jordan defends it more comfortably.

FREE THROW ACE PURPLE IS A NEED! Ok ok, you’re right. It’s just one game. It is preseason after all. Oh and we’re missing some of our best offensive players. Players that shoot well from the line. Well, I’d concede all those points, but then also warn with this. The Nets did get 35 chances from the line last night. That is great. But only 20 of those 35 were made. That’s a putrid 57%. That’s terrible. Last year, the Nets were also in the bottom third of free throws in the NBA. Only six teams shot worse than the Nets, who shot 74.5% from the stripe.

A big part of everything that allows the Nets offense to function is the threat of and the ability to hit the three-ball. Although for a team to shoot 35.7% from three is decent (would be top 10 in the NBA last season), there were only three Nets that night to shoot it decent or exceptionally. That would be Nwaba, Kurucs, and Prince. Together they shot 10/18 from beyond, roughly 56%. The rest of the team was 5/24, below 21%. Again, it’s preseason and only one game where we are devoid of some of our best shooters, but just something I noticed.

But it is early. I cannot stress that enough. Let’s see what these early thoughts mature into as the season progresses.