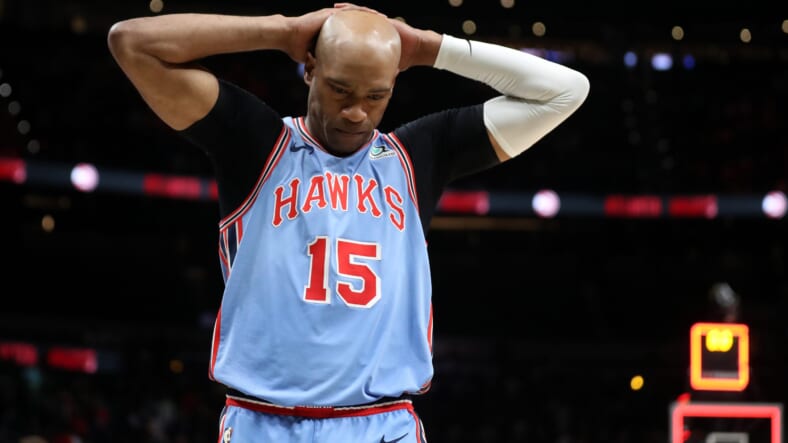 Vince Carter joined the New Jersey Nets in the middle of the 2004 – 2005 season and immediately Nets fans were enamored with Carter’s ability to consistently score around the rim via high-flying dunks and acrobatic layups. Unfortunately, Carter’s tenure with the Nets as is not as glorified as it should be, due to the fact that Carter joined the team shortly after their multiple NBA Finals Runs as well as Brooklyn’s efforts to distance themselves from any players associated with the great New Jersey teams, exceptions being Jason Kidd (former coach) and Richard Jefferson (current color commentator for Nets games on YES). Recently, a ridiculous statistic regarding the longevity of Carter’s career has surfaced, reminding fans just how great he was.

Reddit user babyyodavan discovered this crazy fact after 4 days of research by using a list of every NBA player that ever played and crossed off the names of players that were on the court in each of Carter’s 1,541 games for both Carter’s team and the opponent. Check out the Reddit post here.

Carter has played for (in order) the Toronto Raptors, New Jersey Nets, Orlando Magic, Phoenix Suns, Dallas Mavericks, Memphis Grizzlies, Sacramento Kings, and the Atlanta Hawks. While many believe this last season was Carter’s final season in the NBA, I would not rule out a return after the season was cut short. Carter’s years as an all-star and longevity will surely earn him a spot in the Hall of Fame.

There are many discussions about the Brooklyn Nets embracing their New Jersey roots more and potentially having a throwback jersey night in which players would wear the colors from when the team played at the Continental Arena. Anthony “Pooch” Puccio of NetsDaily wrote a fantastic article explaining why it would be a good idea for Brooklyn to acknowledge their history in New Jersey, you can read it here.

On Wednesday night, the YES Network will broadcast Vince Carter’s dramatic return to Toronto (as a Net). On the same night, Sarah Kustok will be interviewing former Net great Jason Kidd as well. Tune in to both!