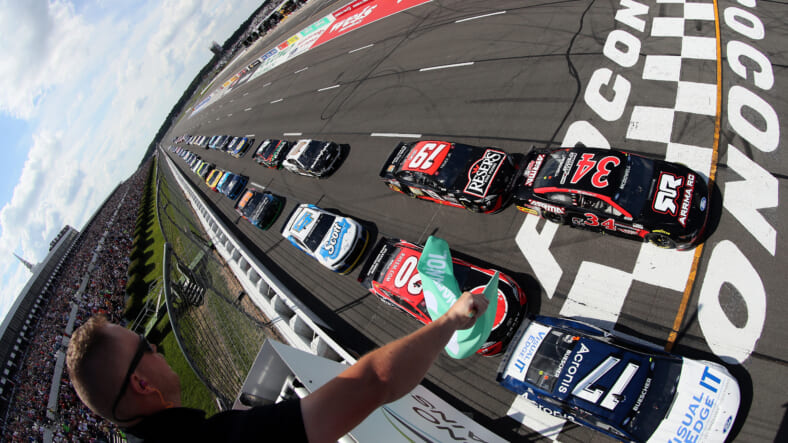 LONG POND, PENNSYLVANIA - JUNE 27: Chris Buescher, driver of the #17 Acronis Ford, and Michael McDowell, driver of the #34 ARRMA Ford, lead the field to the green flag to start the NASCAR Cup Series Explore the Pocono Mountains 350 at Pocono Raceway on June 27, 2021 in Long Pond, Pennsylvania. (Photo by James Gilbert/Getty Images)

Adam Stern of Sports Business Journal reported on Tuesday evening that NASCAR anticipates announcing the 2022 Cup Series schedule next week. While the bulk of the 2022 schedule will likely remain similar to that of 2021, Stern reported one notable change on the Cup Series docket. One of Pocono Raceway’s two Cup Series races will shift to WWT Raceway (Gateway) in 2022.

WWT Raceway has hosted NASCAR sanctioned events in 21 of the last 24 seasons, beginning with the Xfinity Series in 1997 and the Camping World Truck Series in 1998. NASCAR pulled away from the track after the 2010 season; however, the Truck Series returned in 2014 and has kept an event at the Madison, Illinois-based track every year since.

The NASCAR Cup Series coming to WWT Raceway gives fans what they want most — more short-track racing. At 1.25 miles in length, WWT Raceway has low-banked corners that race similar to New Hampshire Motor Speedway. The facility can seat 65,000 spectators and will give midwest region NASCAR fans a new opportunity to catch a race.

Unfortunately, adding a Cup Series event at a new track results in the departure of a race from another track. Pocono Raceway is the victim of losing a race and will go with just one event on the Cup Series schedule for the first time since 1981.

Pocono used to have multiple weekends on the calendar each year but NASCAR condensed the two weekends into a “doubleheader weekend” beginning in 2020. Fans could not attend the event last season due to COVID-19 protocols, but the track sold out camping and nearly had a full grandstand in 2021. TV ratings fluctuated between the two races this year as significantly more people watched Sunday’s Cup Series event compared to Saturday’s.

As of now, only the first two races of the 2022 season are official. The 64th Annual Daytona 500 will run on Sunday, February 20 with the Auto Club 400 at Auto Club Speedway set for February 27. Practice and qualifying sessions are anticipated in most, if not all events in 2022.