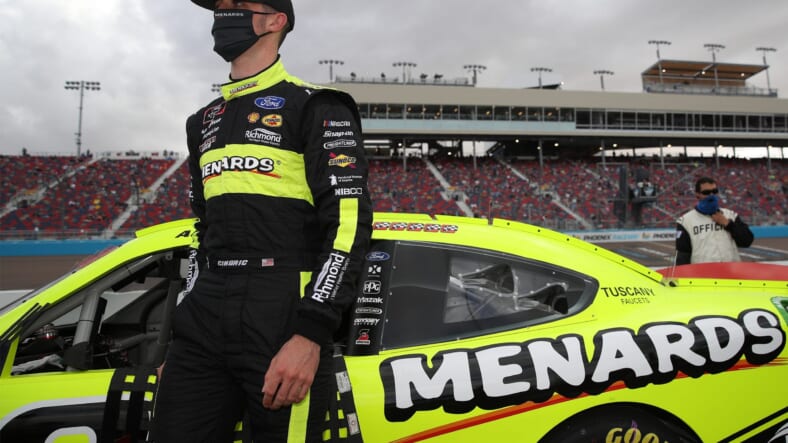 “We were about two-tenths faster [than Cindric]” said Gibbs, the second-place finisher. “[If I had one more lap], I definately could’ve had another shot [to get him]”.

Gibbs led 11 laps, which was the fourth most of all drivers in the race. Daniel Hemric (18) and Harrison Burton (21) each led more laps than him, but Cindric led more than all of them en route to his fourth Xfinity Series victory of the season.

“[Gibbs was] gifted a three-second buffer and it’s his job to do something with it,” Cindric said. “I think [Gibbs] did everything he could, he ran a great race. I felt our strategy was a little bit better, [we] were fairly evenly matched throughout the day in clean air, so I just tried to manage my stuff and my gap and it worked out for us in the end”.

Cindric took the lead on lap 75 at the end of the pit cycle with a significant lead over Gibbs. As laps ticked down, Gibbs slowly cut into Cindric’s lead and narrowed it to within a second with just a few laps left. Cindric was almost collected by the No. 66, a lap car, when he ran out of fuel. However, he managed to avoid him and barely hold onto a victory.

“I thought he was going to run the apron, but then he didn’t have the capacity to do so,” Cindric said. “It was almost worst case scenario with a three second lead”.

Harrison Burton started the race from the pole position, led the first 21 laps, and won the first stage over teammate Daniel Hemric. Burton lost his lead during pitstops, and then wrecked out of the race on lap 38. His crash was right at the end of Stage 2, just four laps after a scary accident involving Justin Haley and Ryan Vargas.

Haley was turned from behind and into the inside wall, eventually coming up the track and collecting the No. 6 of Ryan Vargas.

“I didn’t know that anyone was outside of me or behind me with such momentum,” Haley said. “It just kind of knocked the wind out of me”.

Vargas, sitting 25th in the standings, had nowhere to go when Haley came up the track.

“I just hate it,” Vargas said. “I hate tearing up cars. I’ve helped build this racecar…. I hate tearing up Johnny [Davis’s] racecars because it’s the last absolute thing I’m supposed to do”.

While Haley and Vargas weren’t completely sure how the crash happened, Haley’s teammate and fifth-place finisher AJ Allmendinger had a view of the crash from his No. 16 car.

“It looked like the No. 8 car just absolutely destroyed him,” Allmendinger said. “When I saw him [get turned], I knew that was going to be a massive hit…..I’m just happy that he’s okay”.

Haley was scheduled to run the second race of the Cup Series doubleheader at Pocono Raceway in the No. 77 car for Spire Motorsports. However, under an abundance of caution, the team took Haley out of the car and replaced him with Justin Allgaier, who finished third in the Xfinity Series race.

In addition to the Haley/Vargas crash and the Burton crash, Josh Williams and Santino Ferrucci collided in the first stage while Riley Herbst crashed in the third stage.

The NASCAR Xfinity Series returns to action next Saturday for the Henry 180 at Road America.

“I’m always pumped to go to Road America,” Allmendinger said. “It’s a beautiful place, [it’s] Fourth of July weekend…. what a place to go to”.