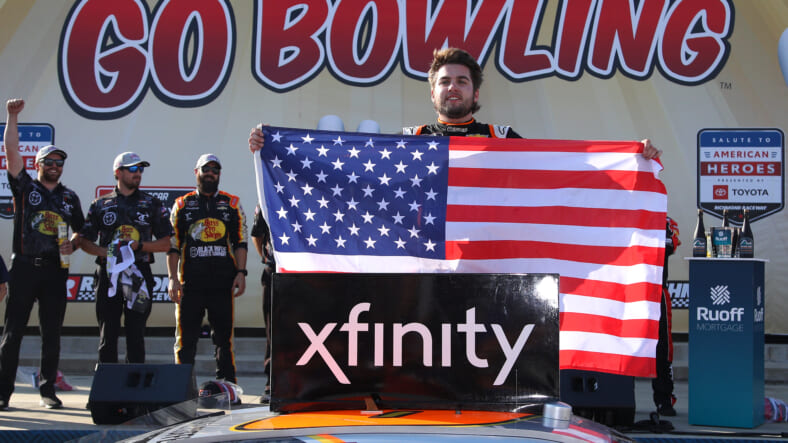 Noah Gragson led the final 14 laps â€“ holding off the field on a pair of late race restarts- in Saturdayâ€™ Go Bowling 250 NASCAR Xfinity Series race at Richmond (Va.) Raceway to earn his second win in as many weeks â€“ celebrating the moment by wrapping himself in an American flag then climbing the front grandstand fence to a cheering crowd.

Gragson, 23, was only three years old when the Sept. 11, 2001 terrorist attacks occurred, but the Las Vegas native was clearly moved by the opportunity to acknowledge the powerful day in American history. And important day in his career.

His .381-second win in the No. 9 JR Motorsports Chevrolet over a hard-charging Kaulig Racingâ€™s Justin Haley gives him a two-race winning streak heading into next weekâ€™s regular season finale at Bristol (Tenn.) Motor Speedway, where the 12-driver Playoff field will be set.

â€œI knew they [Haley] had tires, but the thing that really kept us alive were those two cautions at the end,â€ said Gragson, who now has four career Xfinity Series wins.

â€œBut todayâ€™s not about this team or this win, itâ€™s about everyone who lost their lives 20 years ago. We have a lot of heavy hearts and at least in America we can come together on this day and appreciate all you race fans for coming out.

NASCAR Hall of Fame driver Dale Earnhardt Jr., a four-time winner of this race, finished 14th in his only NASCAR start of the season. He was running among the top-10 but was called for a pit road speeding penalty on a late race pit stop. He still got to celebrate in Victory Lane, however, as one of Gragsonâ€™s team owners.

â€œThey race hard there in the middle of the pack, especially around me, but it was fun,â€ said Earnhardt, who also noted, â€œHelps me remember some of the things that make me a better broadcaster.â€

Earnhardt, the sportâ€™s 15-time Most Popular Driver, is an NBC Sports announcer and moved from pit lane to the announcers booth for the NASCAR Cup Series race later Saturday night at the Richmond three-quarter mile track.

Kaulig Racingâ€™s A.J. Allmendinger and Team Penskeâ€™s Austin Cindric were separated by a single-point in the regular season championship entering the race, and Allmendinger extended his points lead to five points with a Stage 1 win and an 18th-place finish. Cindric finished 16th.

Herbst currently holds 12th position in the NASCAR Xfinity Series driver standings, the final Playoff transfer position, with a 66-point edge on JR Motorsportsâ€™ driver Michael Annett, who had been among the Playoff 12 before missing four races with an injury.