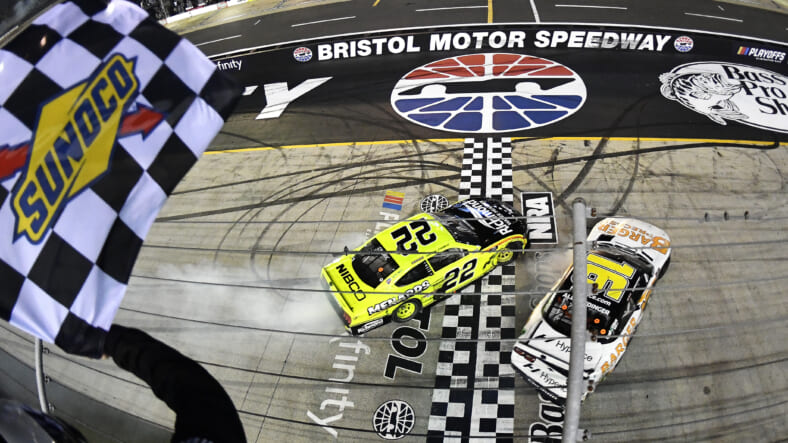 BRISTOL, TENNESSEE - SEPTEMBER 17: AJ Allmendinger, driver of the #16 Barger Precast Chevrolet, spins across the finish line after an incident with Austin Cindric, driver of the #22 Menards/Richmond Ford, to win the NASCAR Xfinity Series Food City 300 at Bristol Motor Speedway on September 17, 2021 in Bristol, Tennessee. (Photo by Logan Riely/Getty Images)

BRISTOL, Tenn. — Austin Cindric may not have had the best car all day at Bristol Motor Speedway, but he had it when it counted. Navigating through heavy lapped traffic, Cindric began to pull away from Sam Mayer and Justin Allgaier with his sixth NASCAR Xfinity Series victory of the season in sight.

All of a sudden — caution. Mayer and Allgaier had tangled up racing for second place, setting up a green-white-checkered finish.

AJ Allmendinger, fighting Cindric for the regular-season championship, got a great launch on the restart from the inside lane. He held his ground with Cindric all the way down the backstretch, the two banging doors in Turn 4.

Allmendinger snuck past Cindric in the corner and pulled away down the backstretch and into turns three and four. However, Cindric had one final run off the corner.

Allmendinger and Cindric slapped doors at the line, both spinning into the inside wall and then back up the track, collecting many other cars. The winner? Allmendinger.

Can you believe this finish?!?!?!? ?@AJDinger wins the race and Regular Season title over @AustinCindric at the line! pic.twitter.com/BYxm1L5fMB

Whether it was intentional or not, both drivers seemingly understood each other. The two were fighting for the regular-season points title and it came down to that one position. Cindric needed to win to steal the title from Allmendinger. Otherwise, he would’ve had to finish at least five spots above the 39-year-old veteran.

“I thought we had a really great battle all season long up to this point,” Cindric told NBC Sports. “I maybe shouldn’t have given up the bottom [on the restart]…..AJ [Allmendinger] obviously just drove straight through us. You have that green-white-checkered racing, but man, what a hell of a race. I tried”.

Allmendinger ran top-10 for most of the night but felt he didn’t have a race-winning car.

“We had about a fourth-place car,” Allmendinger told NBC Sports. “[We] got a chance on the bottom, and got in there and slid into Austin trying to throttle up and stay on the bottom.

“I expected to get run into. It happened in the previous corner. It’s frustrating to get hit that hard coming to the checkered, but we’re battling for the win. It’s Bristol baby! This is what it’s all about.

“You don’t want it to come down like that for the regular season, but it’s the way it’s going to be, and I expect it hopefully to happen in Phoenix, as well”.

Allmendinger’s 20 playoff points from Friday (five for the win, 15 for the regular-season championship) tie Cindric at 44 on the season. However, Cindric’s five wins act as a tiebreaker, giving him the No. 1 seed for the Round of 12.

The Round of 12 kicks off on Saturday night at Las Vegas Motor Speedway.